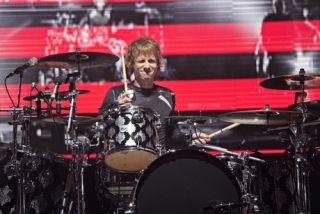 Dom Howard has revealed that Muse are concerned that their jaw-dropping live show could end up leaving them blind.

The drummer told The Sun: "We got some big white balloons, threw them into the audience and decided to focus the lasers on them. It was like a slow burn that gradually disintegrated them into nothing. We all thought, 'What the hell will our corneas be like in 20 years?'

"We could end up like that amazing vocal group the Blind Boys of Alabama - getting around doing it really well but not seeing anything."

Get a taste of their laser-heavy live show in the clip below. You've got to admit, it's pretty cool.