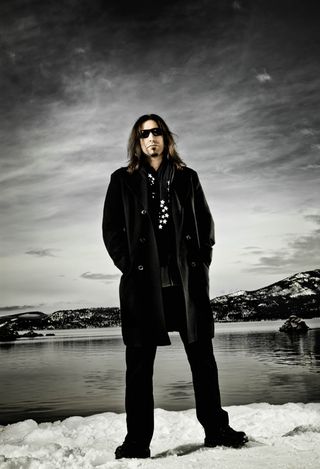 Whitesnake's return to form album Forevermore gets its official UK release today, and we can safely say it's their best effort for over two decades.

New recruit Brian Tichy is at the drumstool for the record, and he told us all about what the Coverdale and co were going for.

Brian explained: "It was like anything else, 'Here's a bunch of new songs we're Whitensake it's going to be a big rock record'. Once you start with that idea there's no confusion in those sentiments."

A new album of course means hitting the road, and the 'Snake have a batch of UK shows coming up over the summer.

Brian added: "It's going to be a lot of fun. Right from the first note of the show you've got to own it, it can't come across like you're new so there's a lot to be expected. There's no excuses. I'm totally looking forward to it. I've always wanted to play with Doug and I'm glad it's worked out this way, and David of course.

"It's going to be great to work with them in a live atmosphere. We'll get the new music and all the classic stuff together on stage and make it sound like a huge rock band."

On how much of Forevermore we can expect to see in the set, Brian said: "I think they have their ideas of what they want to play and what new songs they want to start working on. I remember tracking the record and by the time we'd get finished with each song we'd be,' Well, this one could be cool live'. They all have something about them that work live. It's just going to be which ones are sitting with DC the most."

Forevermore is out now. Whitesnake's UK tour starts in June.