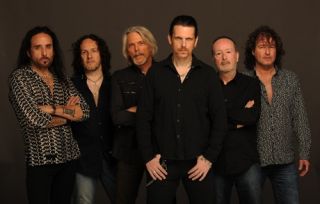 When Thin Lizzy announced their new reunion line-up last year there was one detail that made the whole thing unbelievably exciting. What was it? Ricky Warwick handling frontman duties? Vivian Campbell coming in on guitar? Nope, it has to be the return of Brian Downey.

With Downey back behind the kit we had to grab a few words with him and find out what he had to say about the tour preparations, sold-out shows and the future.

How has the tour been so far?

"The gigs have gone really went well. Our fans have given us a really great reception. It's going great so far. There's a great buzz around this line-up."

Tell us about your preparations for the shows

"It was off the plane and straight into rehearsals. We got the whole set together in two weeks. Vivian is a fan as well as Ricky. It came together really quickly, I was surprised."

Presumably both Ricky and Vivian were Lizzy fans

"They seemed to know the songs. Ricky had a hard time because he had his work cut out over seven months and he was working a lot on his own to get the right phrasings. He's slightly different to Phil, but I think he tried to make it as close as possible. But he puts his own stamp on it. He's not exactly miming Phil. He had a hard time but he succeeded and it came together great."

Have any plans been made beyond the tour?

"There's really been no discussions as such. I suspect we might do some festivals in the summer. I think Vivian has a tour coming up with Def Leppard in June or July, so we might do one or two festivals before that."

You seem to be enjoying it up there

"This is the first time I've done a big tour with the boys for years and it's great to be back with Scott. I've played with Marco (Mendoza, bass) and Darren (Wharton, keyboard) before put I'd never played with Ricky and Vivian. It's a fantastic situation. Vivian brings such a feel into the tracks, he has that Robbo feel, those blues licks that Robbo and Gary Moore have. If you close your eyes you could picture Robbo or Gary up there, but he also puts his own personal style in there. Ricky is great. He has so much energy on stage and gives it his all. He comes off there and he's dripping in sweat, he works so hard. It's great to see. It's great to be back playing in the UK. I haven't played here in quote a few years. I've been living in Ireland and haven't played here all that much. It's fantastic to be playing sold-out shows. I was really surprised that while we were rehearsing some of them were selling out."

Thin Lizzy's UK tour continues until 23 February. Keep your eyes peeled for a special tour of Brian's kit, which will be coming to this website soon.