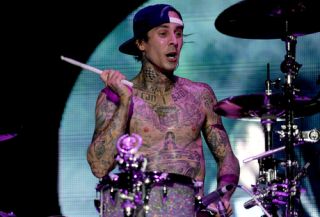 Travis Barker has admitted that his fear of flying could see Blink-182 draft in a replacement drummer for an Australian tour.

Replying to a Tweet from a fan asking when the band will tour Australia, Travis said: "Mark and Tom will be there in Feb of next year but with a full (sic) in drummer cause I don't fly. Sorry brotha."

The drummer recently told the Red Bulletin: "It's something I want to overcome for me, and my kids are scared to death to fly. I want them to witness me overcome it.

"I'm contemplating getting knocked out and getting on a plane to Australia. I want to overcome that eventually. When I do, I think it's going to be Qantas. They never had a crash, never had a fatality, knock on wood."