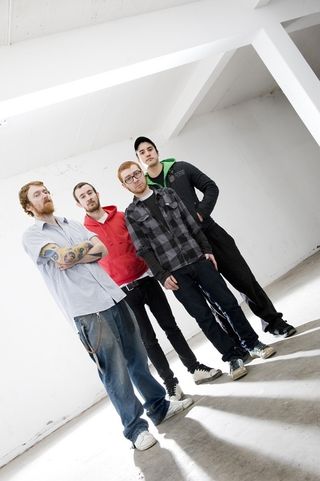 Back in Rhythm 175 we told you to keep an eye out for Northern Irish instrumental maestros And So I Watch You From Afar. Well, it seems that we weren't the only ones impressed with the band's epic sound, because they've bagged the support slot for Them Crooked Vultures' European tour!

Drummer Chris Wee has just been in touch with us and it's fair to say he's - understandably - as excited as a kid at Christmas about joining up with Dave Grohl and co for four dates starting next week.

He said: "We were rehearsing the other day and our manager called up and he was like, 'I got you these four support shows in Vienna, Paris, Amsterdam and Luxembourg.

"I'm going to be setting up in front of Dave Grohl, which is something I never thought I'd say! I started drums listening to Nirvana so I'm going to have to try and compose myself for whenever I meet him. I was reading the big spread with Dave in Rhythm a few issues ago (issue 174) and now I'll be seeing it for myself. It's crazy."

Chris will be trying to keep himself composed on the following dates:

As if bagging one of rock's most sought-after supports wasn't enough, Chris has recently signed endorsement deals with Sabian and Liberty, further proving what a bright future these guys have. Check them out at www.myspace.com/andsoiwatchyoufromafar.

For more hot new bands grab the latest issue of Rhythm and head to the Introducing section. You can order a copy here.