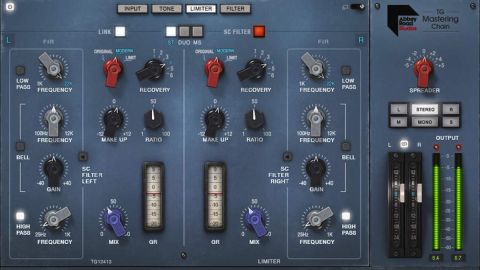 A luxurious, analogue-authentic mastering rack plugin that embodies the timeless spirit and sound of Abbey Road.

The latest in Waves’ ongoing series of collaborations with Abbey Road Studios is an emulation of the EMI TG12410 Transfer Console that’s been a fixture in said facility’s mastering and mixing suites since the early 70s.

Used in the making of albums by Nirvana, Radiohead, Pink Floyd (including the seminal Dark Side Of The Moon) and Ed Sheeran, amongst countless others, the hardware’s credentials are unquestionable, and Abbey Road certainly isn’t going to accept a shoddy emulation, so Waves must have had its work cut out.

Like the real thing, TG Mastering Chain comprises a modular series of processors that are freely arranged in a ‘rack’ and individually bypassed. All but Output can be independently switched between regular Stereo, Duo (dual mono) and Mid-Side processing. In the default main view, a single set of controls is presented for both linked channels, but clicking the Expanded View switch for a module blows it up to fill the whole window, granting access to the Link/Unlink button and separate controls for Left/Right or Mid/Side. This is a fair enough solution for keeping the GUI uncluttered, but you don’t get to choose which of the two unlinked channels is shown back in the main view - it’s always Left/Mid.

The five modules, then, are TG12411 Input, TG12412 Tone, TG12413 Limiter, TG12414 Filter and TG12416 Output, the first and last always at the start and end of the chain, of course. Reordering the middle three is done by dragging them left and right, but slightly confusingly, the signal flow isn’t necessarily reflected in the order of the module selection switches at the top of the Expanded View, which remains resolutely Tone, Limiter, Filter. Not a massive mental hurdle, and that probably is the order you’ll use them in most of the time, but an odd oversight on Waves’ part nonetheless.

The Input module is where fundamental issues with the incoming signal are sorted prior to EQing, filtering and limiting. Here, you can adjust the input level, stereo balance (up to +/-5dB towards either side) and phase (+90o left or right), invert the phase of either channel, and swap the two channels around entirely. The Tape Equalizer - used to provide compatibility between NAB- and IEC-equalised tapes and decks at 7.5 and 15ips - is in place for historical accuracy, but the very particular low/high responses of its four response curves are well worth experimenting with for creative purposes.

The Tone module is a four-band EQ of the ‘musical’ rather than surgical kind, as you’d expect, given its primary designation as a mastering aid. Each band has a fixed set of five detented centre/corner frequencies (32-128Hz, 181-724Hz, 1.02-3.25kHz and 4.1-16kHz), and can operate in any of five modes: Low and High Shelf, and three widths of bell filter - Sharp, Medium and the not-overly-wide Blunt. Up to 10dB of cut or boost is on tap, and a band solo function is available in the Expanded View.

While TG Mastering Chain’s onboard metering amounts to nothing more than an LED ladder peak meter, the included TG Meter Bridge plugin provides the same three meters used by Abbey Road’s engineers with the real TG12410. Handily, you only need one instance of it in a project, too, as the Track Menu drop-down enables any instance of TG Mastering Chain running in the host project to be routed to it.

The topmost section models the Genesis Systems DPM 101 peak programme meter, and features a Hold option for persistent indication of the highest peak until reset. Below that, a pair of VU meters give feedback on the RMS average, and can be calibrated using the unmarked screwheads below. And on the left hand side, the vertically orientated linear phase correlation meter lets you keep an eye on the phase relationship between the left and right channels, and, consequently, how mono-compatible your mix is.

The monitoring source signal for all three meters is set using the red knob, which steps between Input, Gain Reduction (only active when the Limiter is active, natch) and Output. TG Meter Bridge looks great and is perfectly responsive, although some level of ballistics adjustment for the VUs wouldn’t go amiss.

The Limiter module offers not only the behaviours and harmonic distortion of the original Zener diode compressor/limiter (each a separate mode: Original and Limit), but also a much less colourful alternative to it in the Modern algorithm. The Recovery knob switches between six increasingly slow envelope timings, with 3-4 feeling like the sweet spot for mastering, and 2 for mixing. The Ratio is dialled in as a percentage of the maximum 2:1 setting for both compressor models, or 7:1 for Limit; the aforementioned sidechain filters - 48dB/octave Low (1-22kHz) and High Pass (25Hz-1kHz), and a +/-40dB gain Bell (100Hz-12kHz) - are accessed in Expanded View; and the Mix knob enables parallel compression.

Intended for final sweetening and attenuation of extreme highs and low, the Filter module houses High Pass, Low Pass and Presence (medium-width bell) filters, each with a fixed set of cutoff/centre frequencies. And lastly, the Output module allows for final levelling and monitoring of any channel source (Left, Right, Mid, Side, Stereo, Mono), and includes a model of the TG12416 stereo Spreader for ‘tilting’ the mid and side signals by up to +/-5dB.

TG Mastering Chain isn’t the plugin to reach for if you’re after transparency and precision. The sound is decidedly characterful, and the fixed-frequency EQ and filters railroad you towards tried-and-tested settings, rather than giving you total freedom in shaping terms - we mean that as a positive! The Modern compressor mode is a great inclusion, enabling control of dynamics without the heavy old-school saturation of the Original and Limit modes, and thereby increasing the relevance to producers of less sensitive genres. Even so, with its warm, ‘retro’ analogue vibes, this is, foremost, a plugin that gives engineers working in rock, pop, jazz and other similarly ‘physical’ styles what they need for lively, punchy, musical masters.