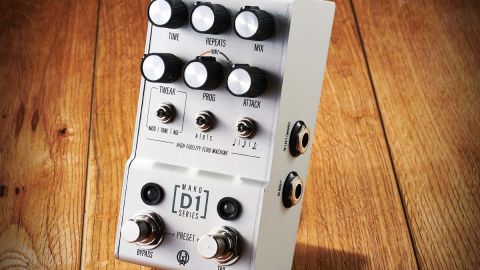 Recallable presets, tap tempo, a wealth of controls and expansive range of repeat options makes this pedalboard-friendly delay a smart and versatile option.

Eschewing the metallic paint job and graphics we might expect in favour of a steel-grey enclosure, Walrus Audio's new stereo delay pedal, the D1, looks a little like a prototype.

But this muted finish serves a purpose, calling attention to a quite dizzying array of controls arranged fastidiously on what is a very compact enclosure (around the size of a Boss compact pedal). The first pedal in Walrus Audio's Mako series, the D1 is a feature-packed stereo delay – or "echo machine" as the enclosure reads – that is based around five different delay types.

The five delay types are selected via the Prog knob and comprise Digital, Mod, Vintage, Dual and Reverse. Each has three parameters – Modulation, Tone, Age – that are easily accessed via a three-way toggle-switch and the Tweak knob.

As for standard delay controls, you'll find Time controlling the length of the delay, Repeats controlling the number of repeats and Mix is for blending how much you want in your signal.

There are two footswitches. One for engaging or bypassing the effect and the other for setting the tap tempo. The tap tempo is really quite clever on this device, as it works with the Division selector switch to choose between quarter (1/4), eighth (1/8), or dotted eighth (.1/8) notes.

Finally, there is a three-way Bank switch (A/B/C) to select the three available presets. Select A, B, or C and hold down both footswitches to activate that preset. And, that Attack knob, which allows you to adjust the volume envelope of the input signal so that at higher settings there is a more graduated fade-in and a softer-sounding set of repeats.

Yes, all this, and in the size of a Boss compact pedal? That's a lot going on, and that's before we've considered MIDI expanding the D1's compendium of presets to 128.

If you are a casual user of delay the D1 is probably not the delay for you. After all, it is not cheap. If you just need one style of delay – say, an old-school bucket-brigade analogue delay – then this is overkill.

But if you are looking for a multi-delay that's not going to crowd out the pedalboard, or looking for an alternative that dispenses with the need for menu screens and so forth, the D1 positions itself as a smart choice.

There's an argument that says there is still a lot to get to grips with here but that's the nature of the beast. Functionality is the goal. To that end, lets turn the Prog dial to select the Digital mode and turn our attention to the sounds.

This is where you can find the D1 is at its cleanest, most pure, and yet even with this you can hear the potential for truly profound delay tones. Set the Tweak switch to Modulation and you can dial in some lovely pitch mod to the repeats.

With Tweak set to Age, you can add a bitcrushing effect on the digital delay. When you bring this into play alongside the Attack control you can really play with the sense of space from the effect.

The Tone setting applies a low-pass filter to the repeats that darkens them nicely – though on the Vintage delay mode you have a low-pass below 12 o'clock on the Tweak knob and a low-pass after 12 o'clock. Again, like the Attack control – this offers a great way to instantly change the character of your repeats.

What the D1 does most effectively is offer you some great-sounding but straight-up vanilla delay options, and then via the Tweak and Attack controls grants you licence to roam off-piste.

Of course, you don't want to be faffing around with toggle switches onstage, so it's a blessing to have nine presets available. Just select the bank via the three-way switch and then scroll through and/or load by holding both footswitches together – the LED over the tap tempo switch will glow green, blue or red to indicate which is loaded.

• Boss DD-500 Digital Delay
While delay junkies may argue that Strymon and Eventide have the edge in the tone department, Boss has them and most others beat in terms of sheer flexibility and value for money.

• Strymon TimeLine
We reckon that a comprehensive range of delay effects that is particularly strong on emulating vintage gear, plus myriad tweakable parameters to create your sounds and 200 memories so you won't lose any of them, is a killer combination.

Obviously, here a menu screen might be clearer, but it should be easy enough to keep track of things. Another neat touch is that you can choose whether you want to store the delay time with your preset or not.

Of course, you don't want to be faffing around with toggle switches onstage, so it's a blessing to have nine presets available. Just select the bank via the three-way switch and then scroll through and/or load by holding both footswitches together – the LED over the tap tempo switch will glow green, blue or red to indicate which is loaded.

Obviously, here a menu screen might be clearer, but it should be easy enough to keep track of things. Another neat touch is that you can choose whether you want to store the delay time with your preset or not.

All in all the D1 is a practical option for the gigging musician. It's built tough, it's compact, and those presets allow for quick changes onstage. But where it really gets you is with all the inspiring tones you can get from adjusting the Tweak settings and that expressive Attack knob. Really, there's so much to explore, just try make it back home for tea.

"There’s a startling amount of functionality available here – far more than we could hope to cover even in a review of double this length – in fact it’s no exaggeration to say that we are confident the D1 is capable of just about any existing delay texture as well as myriad yet to be discovered."
Guitar.com