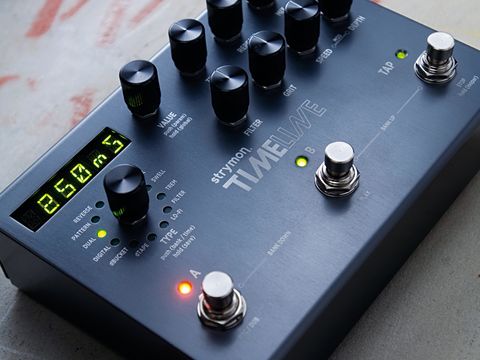 A do-it-all delay pedal, superb for studio and stage.

The TimeLine name may be familiar to some: the Damage Control TimeLine pedal has featured here in the past. Things moved on, the Damage Control guys started up Strymon, and thus we have a new TimeLine - still a rugged floor pedal that offers several different delay types, but one that takes advantage of more recent technological advances, particularly in processing power.

Strymon already has two specialist delay pedals in the El Capistan tape echo simulator and the Brigadier, which serves up the sound of vintage bucket brigade analogue delays. But the TimeLine is more of an all-encompassing beast that offers some of what its siblings do, plus a bunch of other kinds of delay.

You get 12 different types included ('delay machines' in TimeLine-speak), plus a stereo 30-second looper and an onboard memory that can store 200 rewritable presets in 100 banks of two.

The TimeLine features three footswitches, one for tap tempo and the other two for selecting the presets (A and B) in each bank. You select a bank by treading on two footswitches simultaneously - the A/B combination scrolls to the next bank down while B/tap moves up the list - then hit the A or B footswitch to select the preset. Alternatively, you can scroll through the banks and presets with the value knob, loading them instantly.

Each preset is constructed from a host of editable parameters. First port of call is the rotary switch, which selects one of the 12 delay machines: digital, dual, pattern, reverse, ice, duck, swell, trem, filter, lo-fi, dTape and dBucket. The basic parameters can then be edited with the knobs.

The delay time, number of repeats and dry/wet mix are set with the top row of knobs while the lower row of knobs offers control over the sound of the repeats.You can set the shape of the repeat's EQ curve (filter), add distortion (grit) and add modulation with adjustable speed and depth for the majority of the delay machines (some knobs have different functions for the dTape, dBucket and filter machines).

The TimeLine doesn't have what you see is what you get operation, so the physical position of the knobs may bear no relation to the sound of a called-up preset. But when turning a knob, the selected preset's footswitch LED will turn from red to green when you hit the stored value so you always know where your start point for tweaking is.

In addition to the knob settings, all delay machines have a set of advanced parameters (some common, some specific to an individual machine) saved with each preset and all easily accessed by pressing and turning the value knob.

These include such things as a +/- 3dB boost or cut, control over whether the repeats trail or stop dead when bypassed, smearing (softening the attack) of the repeats and a hi-pass filter to clean up the low end. There are also several adjustable Global settings for the unit as a whole.

A nicely programmed bunch of factory presets demonstrates the TimeLine's capabilities while still being musically useful. Of the delay machines, digital is a straight digital delay giving you all the crystal clear repeats that you need, with a maximum delay time of 2.5 seconds.

If you want less-than-pristine repeats the filter and grit controls will mess up the fidelity and you can always dial in a touch of modulation if you choose. For a more authentic vintage delay sound at source there's dBucket and dTape, giving you some of the features of the Brigadier and the El Capistan, respectively.

dBucket offers an excellent reproduction of the old analogue delay sound with a choice of one or two BBD chips among other parameters, while dTape is a fine emulation of an Echoplex with its single sliding head, the lower row of knobs give you access to tape age, tape bias, tape crinkle, wow and flutter so you can effectively adjust how knackered your Echoplex sounds! Lo-fi takes the degradation process even further to create some really gnarly repeats.

Elsewhere you get two independent delays that run in series or parallel, with the second tracking the first at selectable time ratios, reverse delays, delays that swell upwards in volume and a dynamic ducking delay, where the repeats become more prominent at the end of phrases. Trem offers synchronised tremolo delay with selectable LFO shapes, while filter offers synchronised tonal filtering of the repeats for a touch of weirdness and a synth flavour.

If pitch-shifted repeats and creating ambient soundscapes is your thing, ice, which slices the input signal and plays back pieces at selectable intervals pitched from -1 octave to +2 octaves, offers some amazing shimmery, crystalline constructions - you'll be playing with this for hours! Rhythmic multitaps and multi-head tape machine flavours are the remit of pattern, which offers a total of 16 selections of differently spaced taps.

Overall the sound creation facilities of the TimeLine are phenomenal on their own, but there is one extra sonic layer that can be added. In mono, the redundant input and output sockets access the unit's feedback loop enabling you to add external effects through which all the repeats will be processed.

Real time control of TimeLine sounds is also possible - an expression pedal can be connected and assigned to control any number of knobs simultaneously, while further control over knob and parameter values is available via MIDI as well as patch selection through program change messages, and delay time synchronisation by a MIDI clock.

While some players' delay requirements are catered for by a simple compact pedal such as the MXR Carbon Copy, there are others that seek more complexity and variety in their delay sounds.

There are several 'studio-delay-in-a-stompbox' pedals on the market to satisfy that need, albeit often at prices way above what you'd normally pay for a single pedal. The TimeLine is the newest pedal of that type to enter the scene and our view is that Strymon has got the balance of facilities just right.

We reckon that a comprehensive range of delay effects that is particularly strong on emulating vintage gear, plus myriad tweakable parameters to create your sounds and 200 memories so you won't lose any of them, is a killer combination.

Add in the looper and practical footswitching options for live use, which will always give you access to two different delays (and more if you don't mind tap dancing to change banks), and this is something quite special - quite likely all you could ever want in a delay pedal.