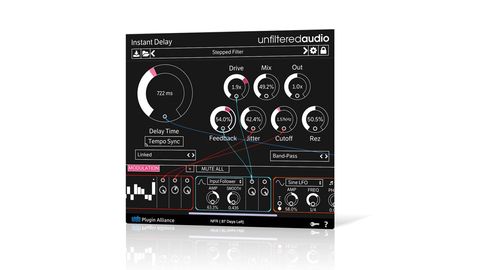 If you can’t afford Sandman Pro, Instant Delay gets you its most distinctive mode at a fair price, with a couple of minor improvements and the welcome bonus of native Roli Lightpad compatibility.

Unfiltered Audio Instant Delay’s Sandman Pro is one of the most versatile delay plugins we’ve ever had on our test machine, and Instant Delay (VST/AU/AAX) is a direct offshoot from it.

Indeed, if you already own Sandman Pro, you might as well stop reading now, as Instant Delay will have been automatically added to your Plugin-Alliance account - go and play!

In a nutshell, Instant Delay is the ‘Modern Instant’ delay mode from Sandman Pro, with the multimode filter and soft clipping saturation stage from Unfiltered Audio’s Indent distortion/filtering plugin. Sandman Pro’s two filters are fixed low- and high-pass models, and while it also features the Indent saturation algorithm, its gain range has been increased for Instant Delay. Yes, this is a basically a cut-down of Sandman Pro, but with the described tweaks made in order to set it apart slightly.

Specifically, Instant Delay is a stereo delay that uses granular windowing to buffer the input signal, enabling delay times to be manually changed and modulated without affecting the pitch or introducing artefacts, as other methods are known to do.

The left and right channel delay times can be linked, set entirely independently (each with its own Time knob) or spread apart (Left has a Time knob, Right has a bipolar Offset knob), and the unsynced time range is 5-10,000ms (although the Offset knob ‘lies’ by continuing to increase its stated value even when the time exceeds 10s).

Independent randomisation of both times is introduced by the Jitter knob, with the degree of randomisation in each feedback loop influenced by the delay time. The input gain into the saturator is set with the Drive knob, and the clipping gets pretty rude at its maximum 4x setting; while the filter offers low-pass, high-pass and band-pass modes with Resonance control.

Instant Delay has the peculiar distinction of being one of the world’s first two plugins (the other being Sandman Pro 1.1) capable of connecting directly to the Lightpad from Roli’s Blocks series of Bluetooth/USB MIDI controllers. The Lightpad can operate in one of four modes: as an X/Y/Z (pressure) pad, a bank of four sliders, four pressure pads (the surface divided into four quadrants), or four toggle buttons (likewise). To hook it up, simply select ‘Roli Lightpad’ in one or more Mod Source menus and assign its four outputs to your choice of Instant Delay parameters via drag and drop in the usual way. You can even use multiple Lightpads at once, each with its own assignments. Given how underwhelming Blocks’ focal Noise app is, we’re glad to see something being done with Roli’s hardware that might actually make it of interest to serious musicians. The rest of the Unfiltered Audio line-up will soon be upgraded to work with the device, too.

Up to this point, Instant Delay is fairly unremarkable beyond its core premise of ‘transparent’ delay time adjustment, but Unfiltered’s brilliant modulation system gives it real creative worth. Up to six modulators are added in the pop-out bottom panel, each one able to serve as an LFO, envelope follower, Sample and Hold generator, Macro knob, Step Sequencer (also added to Sandman Pro as of v1.1) or Roli Lightpad interface (see Blocks heads), and assignable by dragging colour-coded virtual cables to any number of knobs, via as many separate depth-adjustable outputs as you like.

It’s a comprehensive, powerful and musically engaging architecture that opens up plenty of options when it comes to getting Instant Delay moving, from pseudo-timestretching effects, stutters and rhythmic feedback control, to wah- style filtering, dynamic distortion and so on.

Although, on paper, Instant Delay does look like a demo of Sandman Pro, the enhanced filter and rejigged saturation give it its own identity. As an alternative to the multitude of analogue and tape delay emulations that dominate the market, it’s well worth checking out, although unsurprisingly we recommend plumping for its big brother if you can afford the extra $50.