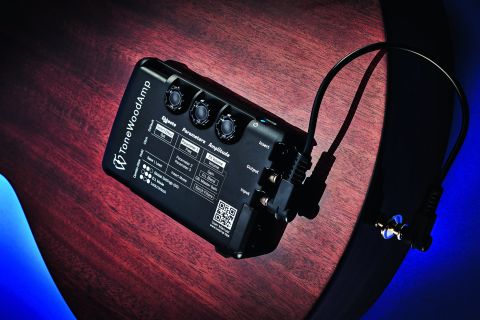 "It’s a fantastic creative tool to use at home... getting sounds fast that wouldn’t be possible without finding your guitar lead and booting up a computer or an amp"

The ToneWoodAmp is an effects unit that can be mounted on your electro acoustic with a fairly simple installation process. It can be fitted to the back of the guitar and uses an output from a piezo or magnetic soundhole pickup, producing sound waves and altering the signal of the pickups to project effects back through the guitar’s body.

Like Yamaha's TransAcoustics, that have the technology built-in to the guitar, the removable ToneWoodAmp has reverb and, through a software update, chorus too. But it has a range of other effects too – plus a selection of adjustable parameters for each one and presets to save your favourites too.

We’re using a Sigma dreadnought to fit theToneWoodAmp for testing and the company’s claim it takes five minutes to fit is actually pretty accurate – providing you watch their tuition videos beforehand.

In brief, slacken your strings, place an X-brace unit on the inside back on the guitar. It stays in place via sticky pads on four points that also have magnets that will hold the amp unit itself in place on the other side of the wood. It’s vital to get the positioning right as there’s definitely a sweet spot when it comes to capturing the optimum vibrations. Then after fitting three AA batteries in the unit it’s time for the fun to start...

And it really is fun – three types of lush-sounding reverb and the delay are our first ports of call and the fact that the latter has editable speed and feedback, as well as its own reverb, means you can really tailor it.

The onboard controls and small display screen feel intuitive to use and encourage you to edit the effects to suit your tastes. We even started learning the delayed riff from Tool’s song Pneuma and got a decent approximate delay setting for it.

Those time-based effects would be enough on their own but there’s also Tremolo Delay, Leslie, Autowah and even Overdrive. A software update via USB can replace the latter with Chorus, which is just as well as Overdrive tends to suffer the most from feedback issues.

The sounds here feel organic, even pleasingly gritty and analogue-esque at times when you play harder. Though you need to be careful with the ‘Amplitude’ volume and gain levels to avoid clipping when digging in. It’s easy to see why players like Mike Dawes love this device, and you can even use the output to gig with it too.

MusicRadar verdict: The ToneWoodAmp is a fantastic creative tool for use at home... or anywhere else. Your can get sounds fast that wouldn’t be possible without finding your guitar lead and booting up a computer or an amp with effects.

"A truly revolutionary product that completely redefines the meaning of 'unplugged' by providing incredibly cool effects processing that are amplified by the acoustic guitar itself." Guitar World

"The ToneWoodAmp is an affordable, cutting-edge product that serves the traditional needs of the performing guitarist. It belongs in every guitarist’s toolbox. In fact, you may find, as I did, that it becomes your entire toolbox." Acoustic Guitar