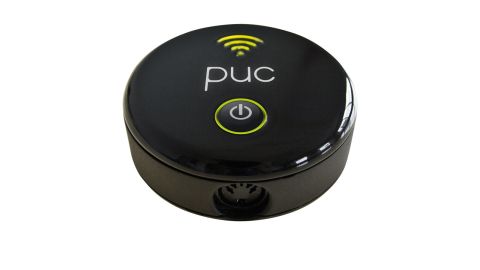 We really wish the PUC also accepted USB MIDI and had two or three more inputs, but other than that, it's a neat, well-realised device that works exactly as advertised.

Available for preorder now after a successful Indiegogo crowd-funding campaign, the PUC is a battery or mains (via micro USB) powered wireless MIDI interface.

With just a 5-pin DIN socket onboard, it accepts input from any similarly equipped MIDI instrument or controller, forwarding its output over its own ad-hoc Wi-Fi network to your Mac, PC or iOS device.

Setup on Mac and iOS is a piece of cake, using OS X's Bonjour and Network MIDI, or the free PUC Connect iOS app (which runs in the background, feeding the PUC's MIDI output to your CoreMIDI-compatible apps).

Connecting it to PC requires the installation of the free RTP-MIDI, but that certainly isn't any sort of chore.

Once you're up and running, the link to the PUC is solid and consistent, and the latency feels surprisingly low - similar to that of a wired connection, we dare say (and a bit higher on iOS than Mac/PC).