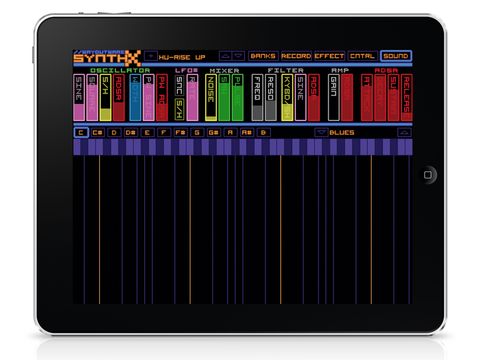 Once they get the stability issues fixed, this one'll be a no-brainer.

SynthX draws upon the same synthesis engine that powered Way Out Ware's KikAxxe plug-in - it even comes with KikAxxe presets.

It has, however, been designed specifically for the iPad's multitouch screen and provides multiple performance variations, including keys, X/Y graph (similar to the one in MorphWiz) and a grid.

The vertical axis on the former two can act as a mod source. It also records and AudioCopy is supported.

All the usual synth stuff is here: You get an oscillator with mixable pulse, square and noise. A wicked resonant filter provides the squelch, and there's an LFO and an ADSR envelope. You can throw distortion, flanger, delay and chorus effects on, and even apply effects to an external signal routed into the iPad.

Sounds good? Sounds great, actually. The trouble is that it hasn't been totally stable for us. Polyphonic use repeatedly crashed it on an iPad 1 and it occasionally crashed on opening on the iPad 2.

Nevertheless, the included presets are awesome and inspired many hours of widdly soloing.