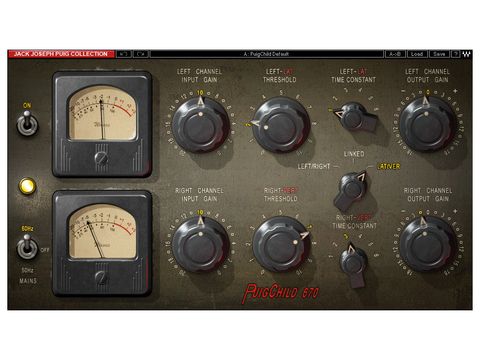 Waves delivers the Pultec and Fairchild sounds in a typically slick package, but there is plenty of competition out there.

In recent times, Waves has turned its attention to visually as well as sonically emulating analogue gear. Some of the company's products (The API Collection and SSL 4000 Collection) are endorsed by the original manufacturers, while others (the Neve-aping V Series) aren't.

The JJP Collection falls into the latter category. Here, Waves has teamed up with the famous mix engineer Jack Joseph Puig and modelled his own processors. JJP has also chucked in a bunch of his own presets, giving you easy 'go to' settings and an indication of what he thinks they work best on.

The plug-ins are based on four hardware processors: the Fairchild 660 and 670 compressors, and the Pultec EQP-1A and MEQ-5 equalizers. There's a certain inevitability about these choices, not least because they are some the most coveted analogue processors around

As we mentioned, Jack lent Waves the very best example of each unit from his private collection of classic analogue gear. This makes sense, because in the same way that two seemingly identical Minimoogs may sound different, so too might two examples of the same compressor.

There are also a few modern conveniences that the original units didn't enjoy: on the PuigTecs, you'll find output levels and VU metering, and all plug-ins have optional mains hum emulation in 50Hz and 60Hz flavours.

We'll kick things off with a look at the EQP-1A, which is an idiosyncratic 3-band EQ. The first band is a low shelf with four fixed frequencies (20Hz to 100Hz) and simultaneous 18dB boost and attenuation.

Next is a bell-shaped section with variable bandwidth, offering 18dB boost at seven fixed frequencies (3kHz to 16kHz). Finally, the third band offers a high-cut with three frequencies and variable attenuation.

Waves rightly points out that due to their transformer stages, the EQs have a gentle roll-off at high frequencies and the plug-ins emulate this, though it's not immediately obvious when you load them up. However, other aspects of the Pultec sound are.

Spinning through the ten EQP-1A and three MEQ-5 presets gives not only an idea of how they sound but also how far a pro mixer chooses to push their settings to get the desired result. The great thing about these EQs is you can do this without it sounding harsh.

We were curious about the Mains Hum setting and came to the conclusion that it also added a tiny bit of hiss. Overall, both EQs sounded very similar to other Pultec emulations we compared them to.

On to the compressors, then, and the 660 and 670 are both simple designs, with input and output levels, threshold, and six time-constant settings that control attack and release.

In addition, the 670 adds dual stereo and linked operation and also the vertical-lateral option, like the original hardware. This splits the stereo input signal into sum and difference elements, with the left channel controlling mono and the right governing the stereo aspect of the signal.

You'll notice there's no ratio setting, as compression behaviour here is a combination of the time constants and signal level. Although having few controls makes the unit look simple, they can still take a bit of getting used to. Again, the presets prove a useful starting point, but these compressors are pretty forgiving in their sound.

Waves has done a good job with the JJP Collection, but it has to be said that there are already other plug-ins that emulate this type of gear, and we're sure there must be even more esoteric items to covet at JJP's studio. Whether the fact that Puig's own units have been modelled here makes any additional difference is impossible to say.

What's more, the presets, although they're a useful starting point, aren't quite as many or as varied as they could be. Still, the classic flavours of Fairchild and Pultec processing are very well represented, making this a desirable bundle.

Listen to the JJP Collection at work in this audio clip: