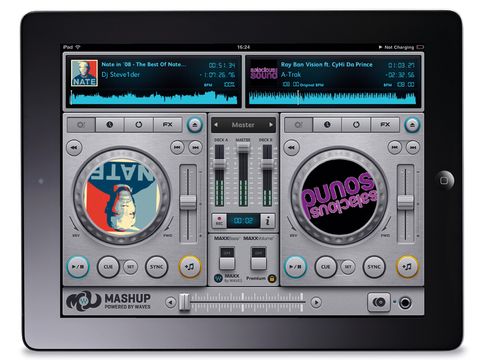 Mashup's ergonomics, interface and design are outstanding, and the iPod/iPhone headphone monitoring system is almost worth the price alone.

In collaboration with NYC-based developer Musicsoft Arts, the mighty Waves is entering the iOS DJ market with a high-end mixing and scratching app for iPad 2 or later.

Mashup centres on two decks, each with tempo-control, half- and double-speed modes, EQ, filtering, automatic syncing, various automatic loop lengths, a speed-independent pitch control and mix record/export. Responsive scratching is a big feature, but it's not so easy to use due to that small interface.

Two things make Mashup stand out. First, the look and feel: the interface is well-designed and easy to navigate, and it's never been easier to import tunes and playlists on the fly.

It all feels much more robust than you might expect, but the real killer feature is the Bluetooth/Wi-Fi monitoring mode. Simply run the app on your iPhone/iPod touch and link it to the iPad app for proper headphone monitoring via the smaller device, as if you were using a multi-I/O audio interface.

It's an awesome system, let down only very slightly by latency and the fact that you can't select the source (when the crossfader is pushed fully left, the monitoring comes from the right deck and vice versa).

There are also some in-app purchases available in the shape of MaxxBass and MaxxVolume, based on the superb Waves plug-in algorithms; however, they can only be applied to the full mix, are blunt instruments on complete tracks and shouldn't be required for modern music anyway. Stick to the EQ and gain, we say.

We'd like to have seen a turntable-style repitch mode, because transients suffer a little when stretching without pitch change, no matter how good the algorithm. That said, the sound is great.

Mashup may be relatively expensive for an iOS app and not that different to the competition in terms of features, but in use it feels like a professional DJ system.