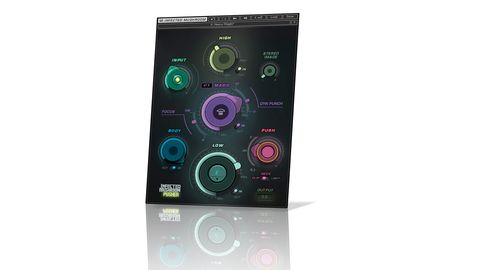 Sounding more expensive than it actually is, Pusher adds punch, polish and power to almost anything - just don't get heavy-handed with those enhancement knobs.

Waves is known for its 'Artist' collaborations with rock and pop engineers (Andrew Scheps, Jack Joseph Puig, Tony Maserati, etc), so its latest partnership, with Israeli dance and electronica duo Infected Mushroom, is an interesting one before the resulting plugin, Pusher (VST/AU/AAX), is even fired up.

Infected Mushroom actually has form in this area, having designed the I Wish "granular note freezer" with Polyverse in 2015.

The initial concept behind Pusher was to build an enhancer and limiter/clipper that would improve the sound of, well, anything - single channels, busses and even full mixes - with minimal user input. Infected Mushroom itself likes to use it to quickly 'master' rough track ideas for test playing in clubs, which strikes us as a strong selling point.

To achieve its goal of functional simplicity, Pusher is pretty light on controls. You start by setting the Input knob (which stays put through preset changes) so that its central 'LED' lights up solid yellow, indicating optimum input level.

Multiband sonic enhancement/excitement - combining under-the-hood EQ, compression and harmonic synthesis - is then dialled in at three frequency ranges: Low, Body and High. Low boosts the low frequencies and increasingly adds bass harmonics as it's raised, while a drop- down menu offers an octave of tuned frequencies (D1 to D#2), below which no processing takes place - ideal for focusing on the root note of your bassline.

Body applies compression and enhancement to the low- midrange, and High adds top-end excitement - ie, 'sparkle'. Further broadband enhancement is on hand in the shape of the Magic knob.

The limiter section comprises just two controls: the Push knob and the Clip/Limit switch. Raising Push lowers the limiter threshold (the output ceiling is fixed at -0.1dBFS), thus increasing the amount of limiting applied, while the switch flips between clipping and regular limiting behaviour, the former delivering much more aggressive, distorted results than the latter.

Now for the magic

In the centre of the Pusher interface, the Magic control boosts the Low, Body and High processing collectively, the idea being to sculpt the bass, mids and treble discretely, then crank up the overall sound by applying broadband enhancement via Magic.

Then there's the Focus slider to the left, which introduces high-mid compression and excitement, and the Dynamic Punch slider, which you'll find on the right, governs the attack and release of the compression introduced by the Magic, for a degree of transient control.

Also accompanying the Magic knob (in that it, too, is activated and deactivated by Magic's In/Out switch) is the Stereo Image control, which does an excellent job of widening the higher frequencies in the signal without becoming excessive as it's turned clockwise. It could possibly do with a cutoff knob for determining the lower limit of said higher frequencies, though.

We're very impressed by Pusher, which certainly realises its mission statement of providing almost instant enhancement of just about any source signal, in a natural, classy fashion. Basses are bolstered quite magnificently, mid-range sounds benefit from extra presence, and top- end material is treated to a fabulous sheen.

The compression and EQ brought to bear can get pretty intense, though, so care is required in setting all four enhancement knobs (but particularly Body) in order to avoid overcooking - something that the inclusion of separate bypass switches for each one helps with greatly. Occasionally, we did find ourselves wishing we could adjust the crossover frequencies of the three enhancement bands, but we appreciate that this would have compromised Pusher's laudable approachability and speed.

However, we are surprised by the lack of a wet/dry mix knob, which would be particularly handy for use on drum busses, and a global bypass button.

Ultimately, while we probably wouldn't use Pusher for serious mastering, for adding an ear- catching, believable finish to individual tracks and busses, and for quick 'demo masters', it's a great success, with exemplary ease of use and a sound that belies its modest asking price.