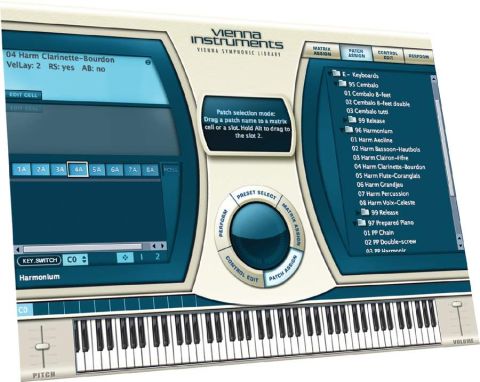 Here's another unusual collection of instruments from Vienna, this time focusing on unusual keyboard instruments. Can it deliver at the same performance level?

The library installs from a single DVD and unlike other Vienna Libraries is only available as a single package - there's no Extended Library to purchase beyond the Standard one.

You'll need 8GB of hard drive space and, for your money, you get three separate instruments with a range of recordings and articulations contained within each one.

The first featured instrument is a harpsichord, recorded in three forms: 8' solo, 8' double and a massive-sounding 'Tutti' model, which is a combination of two 8' in addition to a 4' register. The instruments become progressively full, with the Tutti model a truly wonderful celebration of sound.

Harpsichords have become a staple element of any soundtrack composer's sonic palette and these ones, with rich release and natural reverb, are among the finest I've played.

The second instrument will be less familiar to most, both in name and timbre. To produce its characteristic sound, the harmonium requires the player to pedal-in air, which is then forced past a set of reeds.

These can be adjusted to create different harmonic variations and therefore sounds, so VSL's harmonium offers a selection of core sounds, including cor anglais, clarinet, bassoon and an extraordinary plucked percussion program. Again, the sound is consistently sumptuous; rich, full and effortlessly playable.

The prepared piano will probably be familiar only to those who have a reasonable knowledge of 20th Century concert music.

American composer John Cage first hit upon the idea of introducing foreign bodies such as nails or pieces of plastic into the structure of a piano so that when a piano hammer hits, that object vibrates too, producing strange, discordant tones.

Additionally, VSL's prepared piano offers alternative playing techniques, including the strings being plucked directly rather than using the keyboard.

Film composers should prick up their ears as unusual piano treatments have become popular for the range of emotions they can convey.

Usually such treatments are created via the use of effects plug-ins or through audio processing, but VSL's prepared piano offers an opportunity to create wonderful new alternatives, many of which are evocative and off-the-wall.

Software instruments have been with us for some years now, yet there are few companies producing instruments with the appeal of Vienna's more recent collections.

As ambitious producers strive for increasingly unusual sounds and textures, libraries like 'Elements' and 'Special Keyboards' bridge the gap between genuine innovation and textures recorded from real instruments, with all the richness that live instrument-capture can provide.

Vienna's Orchestral library will always be its signature product, yet these supporting libraries, celebrating the weird and wonderful instruments further towards the periphery of concert music have even greater appeal. The three packaged here should certainly be investigated further.