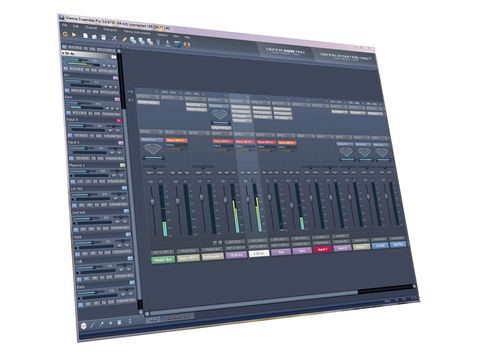 A major upgrade to an already excellent product, this is the definitive networking audio host.

Music software's craving for power only increases as developers find more and more innovative ways to bring us better instruments and plug-ins. Even using high-powered computers, processors and RAM can easily become overloaded.

Vienna Ensemble started out as a way of running virtual instruments in a second (or third) computer over a network, freeing up resources on the main DAW computer for pure audio manipulation. This latest incarnation has some major new features, so here's the rundown.

Pro 5 comes with three licenses. These go on a Vienna Key (purchased separately) or a Steinberg e-Licenser. It's cross-platform, so as long as you have a gigabit ethernet link, it works with both Mac and PC.

As you can launch 32- and 64-bit instances at the same time, Pro 5 enables you to connect either format of plug-in to either format of DAW and will even do that within one computer. The mixer facilitates use of virtual instruments and plugs in VST and AU formats, and is now very well featured. Busses and I/O routing are pretty straightforward, and multiple output plugs such as Kontakt and Stylus are supported.

As a virtual instrument host, Pro 5 connects via a plug-in on your DAW, and if you launch it as a multi-timbral, multi-output instrument, you can bring 16 stereo outputs back into the main DAW. Pro 5 enables you to circumvent the 16-channel MIDI limitation of AU and VST2, and it now has full plug-in parameter automation.

Pro 5 features a new virtual instrument plug called Event Input - launch this as a multi-timbral instrument channel on your DAW and you get 16 more MIDI channels available in Pro 5.

You can use Event Inputs to get beyond the limits of AU and VST2 and have lots more virtual instruments in one instance (you can have as many Event Inputs as you want). If your DAW supports VST3 or RTAS you won't need this, but for many it will be a real revelation because of the new automation possibilities.

Previously plug-in automation was a bit clunky, because it could only be done via MIDI, but now if you press the Use For Automation button on the Event Input you can access 512 automation parameters directly from your DAW channel. There's a pull-down menu that enables you to assign these quickly and efficiently, and you can access MIDI controllers too. With a Learn button on both the source and destination, it couldn't be easier.

Most of us have a few template sessions in our DAW that we can launch depending on what type of track we're going to record - but what happens when you've started working on something and realise that you should have used a different template?

Ensemble enables you to save as many different templates as you like. We've built up a library of them, each with different combinations of instruments and FX. Now when we want strings (four separate samplers with five instruments each), we just call up the relevant template - all the samples get loaded up in a flash, and at worst all we have to do in the DAW is make a new instrument track or two.

The same thing goes for synths: we can now load a template with every machine set to our favourite bass sound, string patch or sequence part with just one command. This makes changing your mind less traumatic and keeps your DAW session far less cluttered.

Ensemble also has one other great advantage: it's incredibly efficient as an instrument host. Consequently, you can often get more instances of certain plugs in Ensemble than in your DAW when running them in the same machine. When you're in a hurry or just need minimum interruption to the creative flow, it can be a real saviour.

Perhaps the biggest innovation in Ensemble Pro 5 is the Audio Input. By inserting the Audio Input plug into any audio channel on your DAW, you can route to an input channel in the Ensemble mixer.

This has two advantages. First, people who use Logic, and therefore AU, can't usually access VST-only plugs, but now these can be sent off to a compatible host - this means that a huge number of free and shareware VST plugs are now easily available.

Second, if you often find yourself running out of processing power on a mix and having to start bouncing, you can now farm off certain processing jobs to your second machine, freeing up resources and speeding up workflow.

Of course, this does mean that you'll need to have plug-in licences for both machines, which may prove expensive - but doing so does open up another option, and it's one that you may find very appealing.

If you do any kind of collaborative work or are part of a band, you may well already be swapping files or whole DAW projects with each other as part of the creative process. Ensemble Pro 5 gives you the option of turning your pooled computer resources into one big system. Networking resources is something many manufacturers are looking at, but this is certainly the product that makes it work right now.

On top of all these new features, Ensemble now offers full ITU (International Telecommunications Union) surround, which means it goes all the way up to 7.1. You just launch the server interface in your DAW in a surround format, load up a surround instance in Ensemble and off you go.

There's full support for surround instruments and a couple of sophisticated surround tools, one for panning and the other for surround balance. Pro 5 integrates directly into your DAW's surround set-up, so there's very little to think about.

In fact, that's the key to Ensemble - ever since we first installed it, we've always just switched it on and used it. Despite Pro 5 being such a major upgrade, this still rings true. In short, we get the strong impression that Ensemble is designed by people who actually use it.

Some tools are creative in themselves, and some facilitate creativity. Whether you work alone in one computer, have a multi-computer set-up or spend lots of time working with others, Ensemble Pro 5 expands the creative possibilities without bogging you down in technicalities.