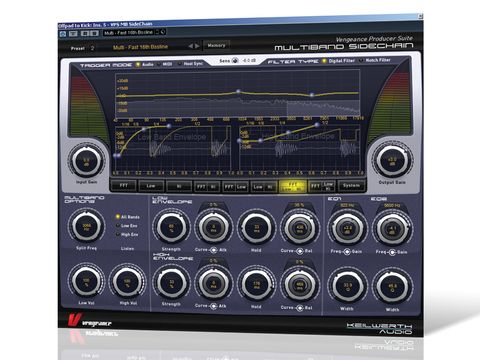 An impressive debut that serves a specific purpose in a most elegant manner.

"How do I do sidechain compression?" - this has to be one of the most common production-related queries there is.

The technique in question often involves tricky routing and the use of a sidechain-capable compressor to give an effect where an instrument 'ducks' in level when another sound (usually the kick drum) plays. This gives a cool 'pumping' effect that's been popularised in dance music by Daft Punk, Benny Benassi and others.

In response to this, Vengeance-Sound have branched out from sample discs to produce its first plug-in, Multiband Sidechain (MBS), touted as a quick, easy and flexible solution for achieving tight sidechain pumping.

The most novel feature of MBS has to be the dual-band capability. It has two envelopes with independent settings, and these operate on separate frequency ranges. You can, for instance, make the bass pump hard (to get it out of the way of the kick drum, say) while keeping the treble consistent.

By default, MBS uses the clean-sounding Digital Filter to separate the bands, but there's a Notch Filter mode, too. This causes unusual phase shifts and cancellations, for special effects and creative applications.

The multiband mode works well, but the crossover filters aren't as steep as we'd like - for example, if you set the crossover to 200Hz and solo the upper band, it sounds pretty much like the full-range mix. It certainly doesn't separate the frequency ranges as we expected.

We do hope that Vengeance improve this in future - it's already bashed out five updates with fixes and new features in the plug-in's first month, which is a very encouraging start.

It's also possible to use MBS in plain old single-band mode by setting the crossover frequency to its minimum value. The default mode in MBS is Host Sync, and this causes the incoming signal to duck on every quarter-note, in time with the tempo of your song - if you're making four-to-the-floor dance music, then this is likely just what you want.

"The most novel feature of MBS has to be the dual-band capability. It has two envelopes with independent settings, and these operate on separate frequency ranges."

There's full control over the envelopes used to achieve the ducking, with knobs for attack, hold and release times; curve shape for attack/release; and a Strength knob to set how much the signal is ducked by. The envelope curves are shown in the display area and you can also drag the nodes to tweak them.

To trigger the envelopes on something other than quarter notes, you can use the Audio or MIDI modes. The latter involves routing MIDI to the MBS plug-in - when a note-on is received, the ducking is triggered, with MIDI velocity further influencing the strength of the ducking. All we miss is the option to hold the envelopes in the ducked position while the MIDI note is held.

Triggering from audio is also a cinch: if you wanted to use, say, the kick drum to duck your bassline, you'd place MBS on the bass track, and the accompanying Transmitter plug-in on the kick channel. You can only have one Transmitter per project, but as Vengeance points out, it's best to use MIDI or Host Sync modes anyway, as they give 100% accurate timing.

The slick GUI suits the dance-oriented Vengeance vibe perfectly (although the high refresh rates caused audio break-up in larger mix projects), and other niceties include eight display modes that can show various combos of spectral analysis and low/high envelope curves, and a dual-band EQ (which we wouldn't miss if it wasn't here, but is handy enough).

In use, Multiband Sidechain is right on the money, with convincing results to be had in no time. It's easier to achieve a specific pumping 'feel' than with a regular sidechain compressor, because you deal directly with the amplitude envelope. And with more subtle settings, it's a neat mixing tool, too.

To conclude, it seems that Multiband Sidechain is our new stock answer to the question that kicked off this review.

Listen to what Multiband Sidechain can do to an electro riff: