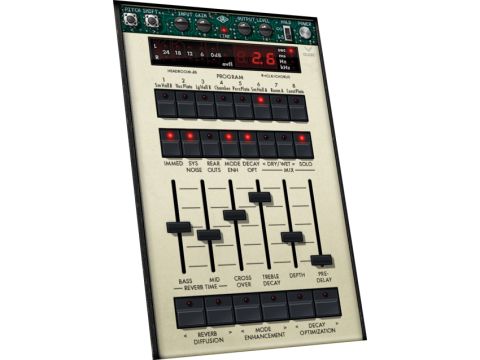 A faithful and simply sumptuous-sounding Lexicon 224 emulation. Soon to be a go-to reverb.

Released in 1979, this is the best-selling digital reverb of all time and has made its mark on a diverse range of records.

Slide me to heaven

The 224 reverb was a famously tactile beast, with six sliders in its lower section to control independent reverb for Bass and Mid frequencies, Crossover, Treble Decay time, Reverb Depth and Pre-Delay.

All nine algorithms from the 224's ﬁnal incarnation are present - two variations of Small Hall, Vocal Plate, Large Hall, Chamber, Percussion Plate, Room and Constant Density plate, the latter of which maintains Density through the reverb tail rather than progressively adding it as most digital reverbs do.

Additionally, there's an algorithm for the 224's Chorus that can be activated either via a control-click or a button above the main program algorithm switches.

The Crossover slider allows you to determine which frequencies qualify as 'Bass' or 'Mid', so there's a huge range of ﬂexibility, regardless of which reverb type you select.

Faithful to the original as ever, LEDs at the top indicate input level and while it's possible to over-cook this by default, a quick click of the 'Open' button on the GUI's right launches an additional panel, which allows you to boost or cut levels.

Also here, you can adjust Output Level, bypass the plug-in via its Power button and even choose whether the display will 'hold' the most recently adjusted parameter's value or, as with the original hardware, display modiﬁed values for one-and-a-half seconds only.

The ﬂexibility of the 224 was encapsulated in part by Mode Enhancement, which offered a simple way to tame and preserve 'naturalness' in the reverb tail. This can be recreated via UAD's emulation but additional parameters, in the form of the Pitch Shift left and right buttons, which allow you to control exactly what happens when Mode Enhancement is engaged.

At ﬁrst glance, UAD's 224 looks like a simple affair, but there's an extraordinary amount of ﬂexibility under the hood. Having every function accessible from a single panel means that tailoring a reverb to your track is intuitive and quick, yet there's plenty here to keep more serious tweakers happy, too.

The sound is everything you could hope for - warm, rich, lush and mix-enhancing.