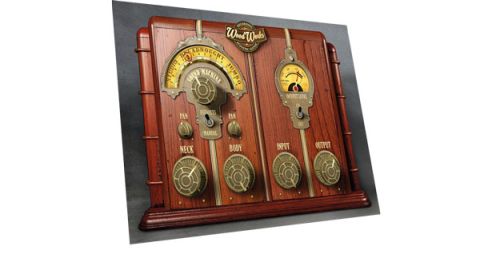 The Distortion bundle/Friedman amps can frazzle any sound source, and Wood Works is highly effective.

UAD's plug-in line has swollen dramatically in recent years and, like its main competitor Waves, it now offers effects to cover a multitude of bases. Classic reverb emulations? Tick. Channel strips emulating the cream of analogue hardware consoles? Another tick. And so the list goes on, with compressors, EQs, delays and much more offered in abundance.

The fact that UAD's hardware hosts its plug-ins, drawing load away from your computer's CPU, has always been particularly powerful at the mix stage but, via UAD's own Console software, effects have more recently been made available at the tracking stage too. This has meant that players can benefit from the sound of UAD's effects on the way into the computer, as well as on the way out.

With the latest software upgrade - Version 8.0 - UAD's Console software has been updated too, alongside the release of some new plug-ins. Check out this month's Producer's Guide To... to learn more about Console and the Apollo Expanded concept which UAD have recently announced. Here, we'll be looking at Version 8.0's new effects processors.

All of Version 8's effects have guitarists in mind but, as we'll see, many have uses which stretch into other musical realms. The first, and perhaps most noteworthy, plug-in is Sound Machine Wood Works which aims to tackle the problem of recording or performing on an acoustic guitar through a piezo pickup.

A huge part of the sound of acoustic guitar is its wooden body, which resonates as the instrument is played. If you choose to record a guitar via its pickup alone, this 'process' is bypassed, dramatically altering a guitar's sound to produce a thinner, reedier tone which lacks the character of a 'true' acoustic guitar.

Wood Works is designed to take an acoustic guitar pickup recording and process it via a simple parameter set, to emulate the sound of the real thing.

Firstly, it allows you to choose from three guitar types, with Studio, Dreadnought and Jumbo options, which are further divided into a number of preset starting points. Below this, the processed sound is created from separate Neck and Body dials, which feature independent level controls to allow you to balance these sound sources to taste. These can be panned too, whilst both Input and Output levels can be tweaked to further optimise the plug-in's performance.

You might think that such a limited parameter set would mean that Wood Works' range of tones would be correspondingly cropped. However, the Machine starting points are dramatically different in character and, in practice, the plug-in allows you to work intuitively and quickly.

It's hugely effective too, whether you're looking to try to emulate the sound of a 'true', mic'd acoustic guitar tone, or to bring more life to a pickup channel you've recorded alongside a mic'd signal.

Unsurprisingly, you may well find that enhancing Wood Works with additional processing - EQ, compression and reverb - will help create even more pleasing sounds but the plug-in does an impressive job even without further enhancement.

Next comes a group of processors, collectively titled the Distortion Essentials Plug-in Bundle. This includes three classic emulations, the first of which is the Ibanez Tube Screamer TS808. Next is the Raw Distortion pedal, which takes its sound from the vintage Pro Co Rat released in the early '80s, while the Bermuda Triangle completes the line-up.

This is based on the Electro-Harmonix Big Muff Pi and, like the other processors in the bundle, is designed for quick set-up. It contains controls for Volume, Sustain and Tone only, whilst the Tube Screamer offers Overdrive, Tone and Level, and Raw provides Distortion, Filter and Volume.

All three processors provide a distinct sonic flavour and, if you like your guitar sounds on the filthier side, you're in for a treat, with hair-raising options provided by all three. But, if you're interested in adding more grit to rasping synth lines, adding power via mashed- up drum parallel treatments or even bringing aggression and fizz to vocals, all three can work beautifully on these sources too.

Indeed, the processors' preset starting points hint at all of these uses and more besides, so don't be put off if you're not a guitarist, as these effects are not to be ignored if you make music in non-Rock genres.