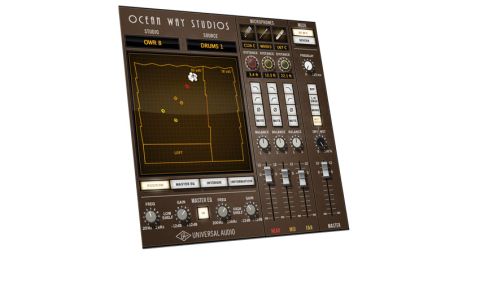 UAD's latest modelling innovation doesn't attempt to emulate a specific piece of hardware or outboard gear, rather the overall sound of a particular studio's rooms, microphones and mixing consoles. As you may have guessed, that studio is the renowned Ocean Way.

What gives a studio a great name? The reputations of famous recording facilities that have entered the studio 'hall of fame' are founded on many things: the gear they can offer, the producers who choose to use them and, perhaps most importantly, the list of notable artists whose hit records have been cut in-house.

Studios are chosen for other reasons too, not least the sound they produce. Of course, racks of gear and large-format recording consoles allow for recordings to be honed and crafted carefully but, as with any recording space, a studio is only as good as the way in which sound works within it.

Anyone who visits Abbey Road is aware of the recordings made there by The Beatles and Pink Floyd. If there is an American equivalent then it is to be found at California's Ocean Way.

With a past and present client list boasting names such as Frank Sinatra, The Rolling Stones, Michael Jackson, Dr Dre, Radiohead and Kanye West, what's clear is that this is a studio that has brought the very best sounding spaces to countless hits.

So, wouldn't it be great if you could bring a little of that sound to your own productions? This was UAD's mission when they set out to produce the Ocean Way Studios plug-in, available now as part of the V7 software release.

A quick look at the plug-ins GUI and you'll see that there's some very clever technology at work here, which has clearly pushed UAD's modelling remit to its very limit. Ordinarily, UAD's engineers use technology to produce accurate reproductions of an ever-growing list of the world's most coveted studio hardware.

This time, the brief was different. Instead, the modelling process has been to capture the sound of Ocean Way's Studios 1 and 2, offering you the opportunity to combine up to three microphone placements around a source within those spaces. It also offers you a wide range of controls over the sound produced.

Here's how it works: you start by choosing one of two of Ocean Way's recording studios to act as the 'shell' for a recording in the top left-hand corner. Then, next to this, you can choose a Source from a drop-down list, which includes two drum kit positions, Vocals, Guitar Cabs and so on.

The right-hand side of the GUI then allows you to activate and choose up to three stereo microphone types and positions for near, mid and far recording. There's a generous collection of classic mics selectable.

Once you've made microphone choices, you can then choose the distance each of these will be from the recording source, applying Low and High-Pass filtering, Phase Invert and Pan positions for each in turn.

At the bottom, you can then balance the volume of each of these microphone signals. This allows for plenty of 'near' for an up-close and personal sound, or a more generous 'far' signal for a bolder, more reverberant treatment.

Of course, there's no obligation to use all three microphone placements at once. Mute buttons in each virtual channel strip allow you to de-couple any of the microphone feeds at any time, facilitating easy A-B comparisons as you work on a sound.

The Ocean Way Studios plug-in is designed to work in one of two modes. It uses an enhanced version of impulse response technology to model the sounds of the featured spaces, so both modes reflect spatial treatments.

The first of the two modes is pretty self explanatory: Reverb mode is designed for use on auxiliary channels. It adds the sound of Ocean Way's recording studios as a reverberant space, complete with the stereo microphone position options, so you can optimise its acoustics to taste.

Its other mode, Re-Mic, is somewhat different. Its role is in-channel, designed to enable you to take one of your own recordings and effectively re-process it. As well as the spatial options provided by microphone options, the direct dry signal you recorded is also processed. It's as if you'd been able to send a file to Ocean Way and have its engineers broadcast it into the studios, then have them send the recorded result back to you.

Further control for either mode is available within the Master EQ section, which offers two-band shelf controls. The Interior tab enables you to see a photo of the studios you're effectively working in. Additionally, Bypass Modes, L/R Swap, Sum to Mono and Wet Solo buttons are offered on the right-hand side, though the latter of these is only available in Reverb mode.

Ocean all the way

This project has seen UAD's engineers take onboard Ocean Way's rooms, its microphone collections and even how those microphones sound through the studio's mixing consoles - the modified Focusrite ISA 110 console in Studio A, and the custom- modified Putnam Dal-con console in Studio B.

The  result is a ground-breaking plug-in that enables a unique form of convolution processing. If you want each sound in your mix to take on the characteristics of one of the world's most famous studios, here's your chance.