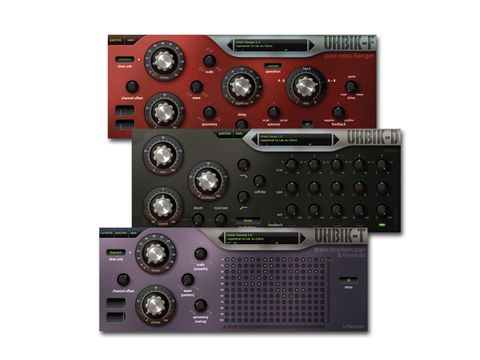 u-he earned its soft synth stripes with Zebra, and the brilliant Uhbik pack gives it similar status in the world of effects.

From the same stable as the stonking Zebra line of soft synths comes this set of eight effects, referred to both collectively and individually as Uhbik.

Like the Philip K Dick sci-fi novel from which the name is derived, the pack offers a collection of diverse characters. And what's more, u-he has promised that there'll be more Uhbiks to come free of charge for existing customers.

The website alludes to an upcoming Uhbik-X, a sort of rack system for Uhbiks with expanded signal routing, and we've also heard rumours of a pitchshifter named Uhbik-G.

So what do you get? Approaching the effects in (almost) alphabetical order, Uhbik-A is an algorithmic reverb, with modulation of the tail and all the usual controls. There are three switchable algorithms: Small, Direct and Open.

As the manual states, the latter is the subtlest, and it's great for adding space without cluttering your mix. Uhbik-A sounds consistently good, and it's not hard to imagine a reverb of this calibre costing as much as the entire Uhbik pack.

Uhbik-D is the multitap delay unit in the set. You can set the time, pan and volume for each of the five taps, although you only get an on/off switch for feedback (there's one main knob for setting the feedback level of all taps). The delay time is set fractionally in 16ths, so you can dial in 4 for an on-beat echo, or 4.1 for a slightly offbeat repeat. However, it would be handy to be able to type in precise values, or snap to whole ones.

Adjustable low-pass, high-pass and clipping are built into the feedback path, and there's slick modulation, too, which makes Uhbik-D perfect for spaced-out dub echoes, especially with the Speed control, which can be manipulated in real time.

Actually, there's a crucial point to make here: just about all knob-based parameters of each Uhbik can be tweaked and automated with no glitching or dropouts, and this can lead to some truly creative and bizarre sounds, not to mention a ton of hands-on fun.

Modulation effects are offered in the form of a flanger (Uhbik-F), a phaser (Uhbik-P) and a pumped-up tremolo (Uhbik-T). All of these share an identical set of modulation controls, with knobs for Times and Phase, along with Smoothing and Symmetry for waveform shaping.

The Times knob has a manual mode, so you can use automation or a MIDI controller to scan through the LFO waveform instead - very cool! The Channel Offset knob, meanwhile, yields an LFO phase offset between channels.

Sound-wise, the flanger and phaser are both fantastic, with all of the swirl and throb of vintage hardware. Uhbik-F is the more advanced of the two, with its overdrive and mixing controls, and it can also manage chorus effects and even through-zero flanging, where one virtual tapehead overtakes another. Far out!

Uhbik-T goes far beyond mere tremolo and auto panning, with the inclusion of a pattern sequencer. You can define up to 11 patterns, then fade between them using the Wave knob, and there's also a mode for applying a pattern per channel (ie, up to eight channels in surround!).

Other treats include LFO-controlled low-pass filtering and a stereo-bolstering Haas delay.

Unlike a pitchshifter, which aims to move frequencies in a logarithmic fashion, so that they retain harmonic coherence (eg, a major chord is still a major chord once shifted, but in a different key), Uhbik-S performs something called frequency shifting, where tones are moved in a linear fashion (eg, every frequency shifts by an arbitrary amount, such as 100Hz).

Frequency shifters are usually associated with weird metallic effects, but Uhbik-S's fine degree of control makes it a cinch to dial in smooth and highly musical pulsations and sweeps. With the default 50/50 dry/wet mix, the shifted signal interacts with the dry one to give a continuously rising (or falling) phaser-esque effect, especially with the Feedback knob brought into play.

These movements can run freely, in sync, or can be automated via the Shift and Offset parameters. There's also an option to reset the phase of the shifting when the signal is quiet, which can work a little like an envelope follower.

Uhbik-S is one amazing effect, capable of beautiful, serene sweetening, wild swooshes or total signal annihilation - and it can even morph between these opposing states. And with the mix knob at 100% wet, Uhbik-S is very effective when it comes to repitching percussive material.

Uhbik-Q is a semi-parametric equaliser with a pair of identical bands that each have adjustable frequency, gain and filter modes, including low-shelf, wide bell, flex bell (where Q is linked to gain), narrow bell and high-shelf modes. One annoyance is that there's no frequency readout for the parametric sections - the 'frequency' simply goes from 0-10.

There are also low- and high-cut filters and a dedicated low-shelf (Bottom), all with selectable fixed frequencies. Uhbik-Q isn't flexible enough to be your main EQ, but it's quick to use and sounds sweet.

Finally, there's Runciter, which is a modern multimode filter, complete with fuzz distortion and envelope follower. Low-pass, band-pass and high-pass filters are here, but unlike similar plug-ins, there's a level knob for each, so that you can blend all three. Coming from the company responsible for Zebra, you'd expect this to sound the business, and indeed it does.

Unlike most plug-ins, the Uhbiks can each work in stereo or surround modes (quadraphonic, 5.1, 7.1, etc). By default, the plug-ins auto-detect the number of available channels and behave accordingly, though you can manually specify a format, too.

Sonically, surround operation gives good results, with delays dancing around the listener's head, and the phaser and flanger giving a desirably dizzying spin. Uhbik-T is a real treat, chugging about the room like a deranged railway engine. Clearly aimed at film composers, Uhbik's surround function nevertheless got us thinking about its potential for live performance.

Unfortunately, surround operation causes issues within certain hosts, particularly those on Windows, such as Sony's Acid. Nevertheless, there's a workaround that involves altering the names of the DLL files, and truth be told, this is not an issue with Uhbik, but with the hosts.

Uhbik offers superior-sounding, sophisticated processors at what works out to be around $25 apiece. Taken as a collection, Uhbik is capable of transforming even the most mundane sound into something interesting and inspiring. Can't ask for much more than that, can we?

Listen to a dry mix, and then hear it processed with the Uhbik plug-ins: