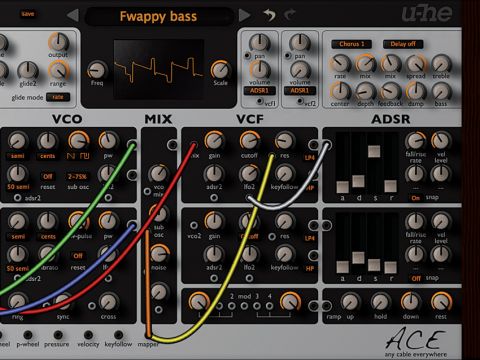 This exceptional synth is about as close as software gets to a genuine analogue semi-modular experience. It really is ace!

We see so many soft synths that it's sometimes hard for us to get excited by them. But u-he's new ACE - or Any Cable Everywhere - has managed to get a serious rise out of us.

Not only is it born of excellent stock (u-he's Zebra 2 synth and Uhbik effects bundle both earned five star reviews on MusicRadar), but it uses an approach that's actually quite uncommon in soft synths: it's a semi-modular design that doesn't differentiate between audio signals and modulation sources.

Modules are connected together using virtual patch cords, but even with none plugged in, you have a usable synth, because ACE's modules are pre-routed in a standard configuration. Using the cables is much more fun, though, as it's far more rewarding to craft your own patches.

In the spirit of the Any Cable Everywhere philosophy, module demarcation only really refers to the function each unit is streamlined towards - you can use an LFO to generate an audio signal just as readily as a VCO, for example. Just like a hardware modular synth, any of ACE's module outputs - whether it bears 'audio' from an oscillator or a 'control' signal from an envelope - can be patched into any module input.

Most modules have several inputs and one or two outputs, and you can run as many cables as you like from each output. For example, an ADSR envelope module with decay and sustain set low could control the cutoff and resonance of a filter, giving a plucked timbre.

You could take another output from that same ADSR generator and patch it to the mix control of the noise generator, for a more aggressive transient. It's quite a cool sound already and that's using only one module output - ACE has 24

Further routing flexibility can be had with the two Multiple modules, which can mix up to four signals, and by using the Mod input, can provide crossfading between signals, as well as ring and amplitude modulation. The latter options are useful not just for the expected metallic noises but for scaling control values.

The operation of Multiples is explained in detail in the manual, and from what could seem like quite a technical standpoint to less experienced users. This 'scientific feel' is a trait that runs throughout ACE, and you can't really get away with just tweaking and patching blindly until something cool happens, as you might on a typical VA synth.

Instead, you have to get your head around what's happening to the waveforms to get ACE to do what you want - the oscilloscope comes in handy here, especially for visualising how filters alter a sound. It's a shame, though, that the oscilloscope can't also display LFOs and envelopes, or indeed, anything patched into it.

Most of ACE's most important features live over on the Synth panel, but the Tweak panel houses some pretty cool things, too. The most significant of these is the mapping generator: a digital unit that acts as another modulation source.

This modulation source is basically a list of values: you set each value in the list, and when playing, ACE decides which value to output depending on which mode it's set to. So, you might set up a simple list of eight random values to control filter cutoff, with the cutoff changing to the next value every time you play a note. Alternatively, you could set the mapping generator to key mode so that the value output depends on what note you play - ideal for creating slight tuning inaccuracies to make ACE sound even more analogue.

Speaking of even more analogue, the Tweak panel also houses the Circuit Bending section. Strangely, there's no mention of this in the manual, but as far as we can tell, the three knobs (labelled Slop, Crosstalk and Osc Cap Failure) are designed to introduce that analogue unpredictability, warble and general feeling of instability to your sounds. You can get some really insane noises here, but we found that setting each knob to about 10% gave us results that were most like a real analogue synth.

ACE's range of features is so massive that we can't begin to cover all of them in depth, and even if we could, it's the ways in which the components interact that make this synth so special. There are a few things worthy of mention, though, such as the ultra-fat chorus, the portamento with multiple glide options, the different oscillator modes (subharmonic, sample and hold, partial, etc) and the beautiful interface.

There's a whole lot of flexibility and power, then, but u-he mastermind Urs Heckmann actually describes ACE as a synth "for newcomers" to modular synthesis. It's not for total beginners, though, as while 'getting inside' a patch is a solid, from-the-ground-up way to learn, using ACE is going to be tricky if you haven't got at least some knowledge of modular synthesis already. There are too many distractions for true beginners and the manual assumes a lot of prior knowledge.

We can't really blame Heckmann, though - the statement just betrays his lofty intellect. Him saying that ACE is "for newcomers" is akin to Einstein saying that degree-level quantum physics is "for beginners".

Something else to be aware of is that ACE can be extremely CPU-intensive. u-he is entirely upfront about this, with a clear warning on its website that only a modern computer can make proper use of it. Part of the reason for ACE's processor-punishing nature is that all signals are calculated at at least twice the host sample rate, unlike the typical VA approach where control signals are calculated at a much lower rate than that of audio. This is what facilitates tricks such as audio-rate modulation - eg, using an oscillator to modulate the filter cutoff. If it's all too much, though, you can reduce the CPU hit by opting for one of the lower quality modes.

But can we, in good conscience, dock ACE points for being neither light on CPU or easy for beginners? No, we can't, for two reasons.

"ACE has that elusive analogue charm in abundance, and the trade-off for this next-gen sound generation is an increased CPU hit."

First, there's the sound: even before you start plugging in cables, this synth sounds stunning. Attaining the sonic charm of vintage hardware has become something of a holy grail for soft synth developers and even the biggest synth makers often still can't get it quite right. ACE, on the other hand, has that elusive analogue charm in abundance, and the trade-off for this next-gen sound generation is an increased CPU hit.

Perhaps even more astonishing than the sonics is ACE's price tag: it's only €69. Can't quite believe it? We'll prove that's not a typo: it's sixty-nine Euros. A steal for what is, hands-down, one of the best synths we've ever used.

Listen to what ACE can do: