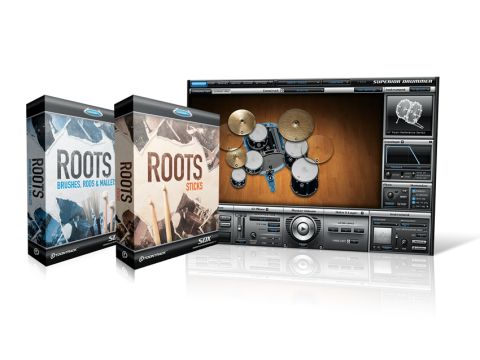 Yet another feather in Superior Drummer's well-festooned cap.

Recorded at the legendary Blackbird Studio in Nashville (home to an extraordinary array of mics and classic outboard), the latest addition to the SDX series of Superior Drummer 2 expansions comprises two related libraries - Roots: Sticks, and Roots: Rods, Mallets and Brushes.

They're available separately (£127 a pop) or as a bundle, with the former weighing in at 36GB and the latter at 28GB (although smaller installs are included). The difference between the two liesinthe implements used to do the hitting.

With Roy 'Futureman' Wooten manning the tubs, the original idea behind Roots was - so Toontrack says - to capture "the ultimate jazz library". But the sessions went so well that the end result is far more diverse than that.

The drums and cymbals used cover an impressive range of manufacturers (mostly vintage), including Pearl, Gretsch, Ludwig, Camco, Rogers, Zildjian, Sabian, Paiste and others - presumably Wooten's personal collection. While less of these are represented in Rods, Mallets and Brushes than Sticks, what is there has been fully captured using said trio of beaters, complete with swirls, swishes and other articulations.

The instruments themselves sound truly fantastic, and mixing them is a delight (or a potential nightmare, depending on your skills at the virtual desk!), with full control granted over a jaw-dropping 23 channels of samples (16mono, seven stereo). That number includes three ambient pairs, a Decca tree and a live reverb chamber.

Rods, Mallets and Brushes is decidedly jazzy, although singer-songwriters will love the gently impactful sounds of the hotrods. Sticks is clearly the more versatile option - it comprises a rich, well-conceived repository of sounds, some tight and funky, others looser and more rocky.