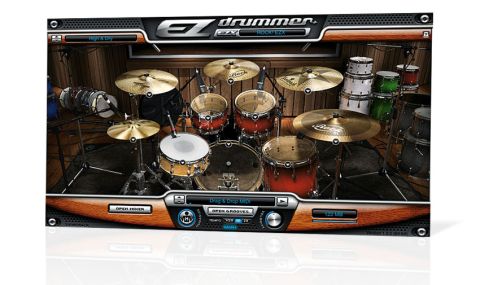 Big, bombastic and beautifully produced, this is a must-have for EZdrummer users, and worth a serious look even from Superior Drummers.

Toontrack's biggest EZX expansion for EZdrummer and Superior Drummer 2 yet, Rock! consists of eight five-piece drum kits, each with three crashes, ride and hi-hats, all of which are freely mix-and-matchable via the menus on each kit piece in the main interface.

The 1.7GB sample bank draws on (and adds to) the countless multisample recording sessions done by Toontrack over the last decade or so in studios including Blackbird (Nashville), Allaire (New York) and 2khz (London), for the production of Superior Drummer and its various expansions.

Rather than just port all this good stuff straight to EZdrummer (which would still have been pretty cool!), however, Toontrack have handed them back to original engineer Neil Dorfsman (whose other credits include Dire Straits, Paul McCartney, Sting, Bruce Springsteen, Bobs Dylan and Marley, and many more) for recompiling, remixing and general overhauling. The result is pretty special.

Perhaps the most remarkable thing about the eight kits is the breadth and variety they offer. From the massive attack of Bright Ambient, through the vibe and grit of Vintage Punch, the dirt and clatter of Ringy, and the slamming power of 80s Rock, to the funky edge of Tight Punch, the dark, snares-off bounce of Woody, and the thoughtfully-included blank canvas of Classic Dry, it really is all killer.

The mixer includes both dry and compressed channels for the kick and snare, as well as Ambience, Drive and SubSqueeze channels for adding room, distortion and SSL Buss compression to the whole kit, all in parallel.

The usual song-based roster of grooves and variations is in place, ably performed by Martin Kristoffersson and giving non-drummers a solid set of authentic beats and fills to drop into their tracks.

Drummers, meanwhile, will find Rock! every bit as playable using triggers or e-drums as the other members of the EZX family.