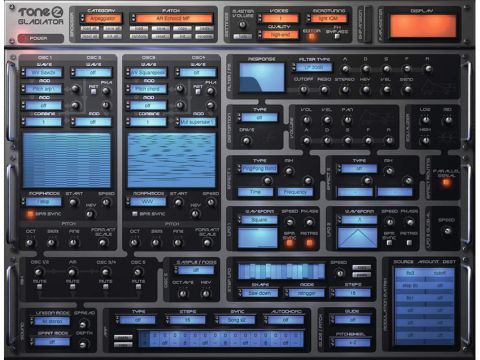 This is a seriously fine-sounding instrument. Hardcore synthesists in particular will love Gladiator's innovative approach to sound generation.

With Gladiator, Tone2 is claiming to have created a brand new type of synthesis known as Harmonic Content Morphing (HCM).

It works something like this: Gladiator's oscillators employ a method by which the waveform in question is broken down into a collection of harmonic snapshots, with 256 of them comprising a morphtable. The user can then manipulate the morphtable in a wide variety of ways

Now, we're not sure if this method is technically similar to, say, Krishna Synth's Frame Oscillator, or even the graintables that fuel Reason's magnificent Maelstrom, but in practice, they have some things in common. The technology probably won't flummox synthesists weaned on Waldorf or PPG wavetable synthesizers, either, though it's considerably more complex than those.

But is it really the "revolution" in sound design that Tone2's marketing department suggests?

Gladiator is a cross-platform VST and AU plug-in. It's a Universal Binary and available as a download. Copy protection takes the form of a simple and non-intrusive key file, and you're free to use a single licensed version on a Mac and a PC. Multi-core and 64-bit machines are supported.

When you first fire up Gladiator, you're met with a collapsed rack view that offers immediate access to the most used features: the patch browser, microtuning functions, master volume controls and more. The Editor button opens the full interface.

Annoyingly, whenever we opened a project using Gladiator, the interface was collapsed into the default rack view, even though the Editor button was lit up to show that it had been saved otherwise.

As we've suggested, Gladiator's strengths begin with its powerful HCM oscillators. There are five sections, one of which is devoted to various sorts of noise, and not just the obligatory white or pink varieties. You get dozens of sampled transients, plucks, pops and even burps.

These oscillators employ a fairly unusual approach to synthesis that takes some time to get one's head around, but with a bit of perseverance and the PDF manual, the experienced sound designer should be able to get to grips with what's happening under the hood.

You'll find yourself in more familiar territory once you've left the oscillator sections. Gladiator comes armed with an arsenal of filter options, including low-pass in nine different flavours, a quartet each of high-pass, band-pass and FM filters, along with formant, comb, phase and a few more besides

We're particularly keen on the Resample filter, which imparts a metallic grunge to the input.

Oddly, the standard Moog-style 24dB low-pass type is absent, though the filters are resonant and sport their own five-stage envelope generator.

More modulation awaits in the form of a pair of LFOs and a step LFO, the latter of which is put to good use in some of the thumping, pumping presets. There's a dedicated amplitude envelope (another five-stager), and modulation is routed via a familiar mod matrix.

Gladiator features a built-in distortion processor with seven models on tap, including bit-crusher, tube and transistor models, and more. In addition to the distortion, you'll find a rudimentary EQ section and a pair of effects processors for the usual delays, choruses and so forth.

The reverb sounds surprisingly lush, but it is, we're sad to say, slathered a bit too generously on the included presets. What's also a little unfortunate is the fact that not all of the effects parameters are intended for real-time manipulation, and we encountered the occasional crackle as a result of our attempts to so use them.

Elsewhere, a cracking Unison function helps in the creation of fat trance stabs, and performance controls abound, including a superb arpeggiator.

This synth is not without a minor bug or two, the most bothersome of which is the fact that it seemed not to remember our parameter changes when we saved a project in our host DAW. If we made our own patch and saved it, we had to re-load it every time we opened the song.

The developer is aware of this and other problems, though, and say they'll be ironed out soon in a free update.

What's clear is that Tone2 has produced a deep and impressive synthesizer that goes well beyond the usual subtractive, virtual analogue fare. It sounds fantastic - full of power and with the sheen of an expensive hardware synth.

Hear what Gladiator can do by playing the following audio examples:

For a more detailed review of Gladiator, check out issue 123 of Computer Music, on sale now.