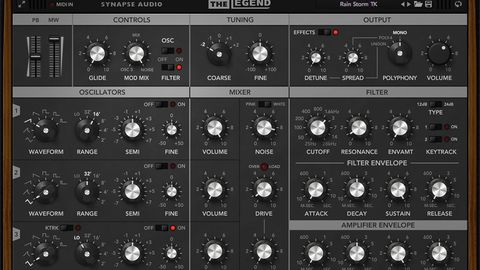 A Minimoog with bells on, The Legend is a stunning emulation of the most important synth ever made, with a totally legit sound and numerous handy extras.

The Legend (VST/AU/Reason Rack Extension) sees the Minimoog Model D  - widely accepted as the 'best' version of  Moog's game-changing analogue synth - brought to life onscreen by a developer with a well-deserved reputation for excellence in oscillator and filter modelling, both, obviously, key requirements in any classic synth emulation.

Indeed, Synapse Audio claims that The Legend's oscillators, filter and amplifier "have been modelled to an accuracy never seen before in software", even taking into account such vagaries as temperature changes and the influence of the power supply on the circuitry. At the same time, a few modern niceties have been worked into the mix, including, as you might expect, polyphony.

For those new to all this, the Minimoog, launched in 1970, was the world's first truly portable analogue synthesiser. A monophonic instrument (ie, only able to play one note at a time), it features three oscillators, a noise generator and a resonant low-pass filter, with three-stage envelopes for modulation of the amp and filter, and the ability to use Oscillator 3 and/or the noise generator as LFOs, wobbling the oscillator pitch and/or filter cutoff.

Comparatively simple by today's standards, what makes the Mini such a hardy perennial in the electronic music garden is its ease of use and incredibly full, weighty sound. Still the first choice of many producers for basses. lead lines and FX, the Minimoog is a bona fide, well... legend.

The Legend's GUI embodies the spirit and vibe of the Model D's control panel, but with the layout redesigned to be a bit more intuitive than the real thing (the Oscillator and Filter Modulation switches are positioned alongside the Mod Mix knob, for example), and to make room for its new features.

Clicking the main logo or the button at the top right flips round to the 'back' of the synth, where various  global and component parameters are adjusted and The Legend's two effects are housed.

In fact, the effects are as good a place as any to get into The Legend's hardware-transcending enhancements. Comprising separate Reverb and Delay, both with Wet/Dry mix controls, the effects section is intended for general polishing and 'spatialising' of patches rather than intricate or deep processing.

To that end, the controls are succinct and straightforward, with Time, Feedback and Width (from mono to fully panned ping pong) for the Delay, and Time, Color (balancing low and high-frequency reverberation) and Width for the Reverb.

The lack of an unsynced option for the delay time sits at odds with The Legend's retro nature, and although we can understand Synapse Audio not wanting to put the effects on the front panel in the name of authenticity, we'd happily trade that off against the convenience of being able to tweak them without having to switch to the rear view. They're part of the sound design workflow, after all, not 'options'.

Above the effects section on the rear panel are an array of global and component tweaking controls. The Global options begin with Up and Down Pitch Bend Range, each of which can be set in semitones from zero to two octaves. Note Priority switches between standard Last Note Prority voice stealing and Round Robin, which cycles through the four voices with each new note.

The Mono Mode switch toggles the envelopes between retriggered and legato action, and Model Revision lets you choose one of two oscillator board models: Early and Late, Early primarily making the three pulse waves a touch brighter and more upfront.

The Modulation and Filter sections contain controls for restricting or extending the full ranges of The Legend's pitch and filter modulation, and filter cutoff and resonance, as well as response curve shaping for the mod wheel.

The Oscillators section's Key Tracking and Drift knobs dial in (or out) random relative tuning discrepancies between the oscillators when playing up and down the keyboard and over time. The Saturation knob applies rather lovely distortion to the Amplifier stage.

Finally, Mains Frequency affects the modelling of the power supply, although the difference this makes (50Hz or 60Hz) is negligible at best.

More important than the effects in terms of architectural transformation is The Legend's polyphony. Three modes are on offer: Mono, Poly 4 and Unison. Mono is traditional monophonic Minimoog behaviour; Poly 4 enables up to four simultaneous voices; and Unison is monophonic but with four stacked unison voices, pitched away from each other by the Unison knob.

The stereo Spread knob works in Unison and Poly modes, pushing notes 1 and 3 out to the left and 2 and 4 to the right in the latter.

While we've no idea what sonic issues Synapse had to deal with in order to maintain that famous Moog sound despite the synth doing something it wasn't designed to do - considerable ones, presumably, since it hasn't ventured beyond four voices - we can happily report that The Legend pulls off polyphony totally convincingly.

The other major architectural deviations from the real Mini are the inclusion of the full rack of seven waveforms and Semi/Fine tuning controls for all three oscillators; a 12dB/octave filter mode; pre-filter overdrive; and 'upgrading' of the Decay knob and On/Off switch into discrete Decay and Release knobs, for extra flexibility in the sustain department.

The Legend both sounds and feels about as close to a real Minimoog as we reckon it'll ever be possible to get without passing actual electricity through a plugin. The oscillators exude all the requisite bounce and low- frequency energy, while the filter is smooth, rich and warm (and self-oscillates beautifully), and the envelopes have every bit of that characteristic snap and shape.

Of course, no two Minimoogs sounded exactly the same, so the emulation target is somewhat movable, but Synapse have captured the essence of this seminal instrument perfectly, and only the most resolutely software-phobic synthesist could even begin to argue otherwise.