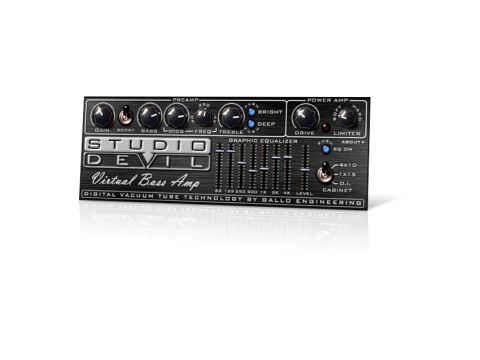 Studio Devil has struck gold once again, and with bass amp sims thin on the ground, VBA could really hit the spot.

This is Studio Devil's bass equivalent of its Virtual Guitar Amp, and it's sure to appeal to those seeking affordable but effective bass tones.

Just like VGA, VBA has a simple, single-screen GUI. It's split into four sections, the first being the Preamp panel, which has Gain, Bass, Treble and Mids controls. This last dial has an associated Freq knob, to set the centre frequency.

In addition, there's a Boost switch, as well as two blue buttons for engaging the Bright and Deep settings.

Next up is the Power Amp section, featuring a Drive control and Limiter (ranging from soft to hard). There's a choice of two cabinet setups - 4x10" or 1x15" - or a DI setting (ie, no cab emulation). Finally, there's a seven-band graphic EQ.

Studio Devil prides itself on its analogue-style sound, and the first thing that strikes you about VBA is how warm it is. The bottom end is full and powerful, but the mids and top end are still very crisp.

As good as the 'regular' sounds are, engaging the Boost takes things up a further notch or two. This drives the virtual amp circuitry hard and produces a natural overdrive that further exposes VBA's warm, valve-like tones.

The power amp's Drive control also pushes VBA into overdrive territory, though this is more aggressive and less natural-sounding than the Boost control - great for those looking for over-the-top, piledriving distortion.

Studio Devil claims that the EQ is "tuned specifically for bass guitar" and we're inclined to agree with them. Boosting the 62 and 125Hz faders adds power to the bottom end without compromising clarity.

Meanwhile, the 2 and 4kHz sliders bring out just the right amount of fret rattle without making the bass parts sound unnatural.

We also spent quite some time dialling in different EQ curves and found that even the most radical adjustments still sound musical - no mean feat for a seven-band unit.

Overall, VBA is very easy to use. The straightforward, amp-apeing layout means even inexperienced engineers will be able to generate great tones with an absolute minimum of head scratching.

While there are only ten presets provided with VBA, they're all useable and range from classic, clean tones right through to aggressive, overdriven metal ones.

One small gripe we have is that the plug-in lacks a built-in tuner. Granted, it's a compact unit and space is tight, but, in practical terms, a separate unit has to be loaded to tune up while jamming or recording. However, this is a small point and it doesn't detract from the fact that VBA is an excellent bass amp plug-in that certainly fills a gap in the market.

While it's true that IK Multimedia's Ampeg SVX bass amp plug-in has performers and producers alike salivating over its 'as good as the hardware' tones, VBA comes in at a fraction of the cost and has pretty much no competition in its price range.

In short, Studio Devil has created another must-have plug-in for anyone recording bass guitar or using live samples. And, best of all, it's cheaper than the average stompbox pedal.