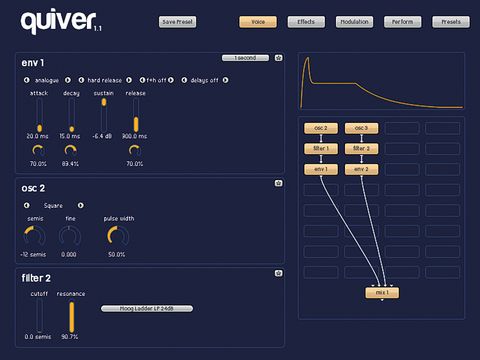 Behind that unassuming façade lies a modular synth of extraordinary power.

Software modular synths were all the rage for a while, but lately, fixed-path instruments have taken over our plug-ins folders.

Maybe it's because modular synths have never been perceived as particularly user-friendly - a belief that new Denmark-based developer Straightarrow hopes to change with Quiver.

"The standard oscillator includes everything you'd expect from a well-designed analogue synth."

Quiver's default GUI is restrained to say the least, in flat navy blue with 2D graphics. Layout-wise it resembles u-he's Zebra, with the main Voice page divided into sections. One panel depicts the routing of the various modules in a 4x8 grid, while the remainder are taken up by the parameters of the chosen module.

Quiver's presets are pretty lacklustre. We'd really like to have heard fewer predictable sounds and more of the sort that show off the strengths of its modular synthesis engine - or even just the raw power of its filters and oscillators.

A few of the FX and pads are decent enough, but there are far too many bread-and-butter sounds, some of which are hampered by over-use of effects (bass sounds with long delays, anyone?). The distortion is also a bit too liberally applied, resulting in some overwhelmingly loud sounds.

Of course, you buy a modular synthesiser to produce your own sounds, so we're not going to write Quiver off just for its anaemic factory bank. What's more, we're pleased to report that it is easy to make impressive sounds with the thing. The synth offers plenty of modules, so while we can't cover them all here, we'll hit the highlights.

Find your own voice

You'll likely be spending most of your time on the Voice page, which is where the basic sound is constructed. The 4x8 grid on the left can house oscillators, filters, panners, EQs, mixers and more. There are 14 modules available, including delay and distortion modules that can be placed anywhere in the 'Voice' signal path.

As with any synth, the sound kicks off with the oscillator. Because Quiver is a modular synth, you can pile in a vast number of them, though you'll have to make allowances for other modules with which to mix them. There are two oscillator types: one standard analogue and another called the Paderizer Oscillator.

Moving on from the standard analogue oscillator, the parameter editor for the Paderizer takes up the entirety of the left side of the GUI and then some! The display just above the module grid gives a real-time view of the waveform.

The Paderizer is really a complex additive oscillator, though the method by which the waveforms are designed goes much further than the oscillators on some dedicated additive synths, even. Seven drop-down menus each provide a list of waveforms or functions that can be applied to the oscillator's wave.

The simplest is, of course, a sine wave. Selecting Add Sine simply drops in a single partial at the fundamental frequency. You can offset this frequency to veer from the root pitch, and you can adjust the volume level - fair enough.

However, the drop-down also includes Add Saw, Add Square, Add Thirds, etc. You can keep adding, adjusting and offsetting each until something like a complex wave is achieved.

Better still, you can drop in filters, logic functions and other modifiers to further customise the shape. There are all manner of other tweaks available, including those that multiply the wave and spread it, detune it or add disharmony: powerful stuff!

Quiver's filter module offers no less than two dozen filter types, with MoogLadder and Butterworth filters in low-pass, high-pass and band-pass varieties, and 6, 12, 18 and 24dB slopes on board. The filter module is simple to operate and the sound is phenomenal.

Quiver's envelopes appear in both the Voice and Modulation pages. They're bog-standard ADSR jobs, although you can choose from 1-, 4-, 16- and 60-second modes.

Quiver's effects page also features a grid (this one 4x7) into which effects modules of various types can be inserted and patched together. This enables you to do all manner of creative things, such as patching reverbs in front of distortions.

All the usual suspects are there: chorus, delay, reverb, distortion and EQ. However, they're joined by rarer goodies such as amplitude modulation, crossfade, stereo split and stereo width processors; there's a filter module here, too.

The effects all sound good and can be tempo-synced where applicable.

Modular synths are all about modulation. Quiver doesn't disappoint here, with yet another pair of grids (each 4x4).

One is dedicated to global modulation, the other to voice-only. LFO, envelope, waveshaping, pitchbend, modwheel and offset modules are available, along with sample+hold and a number of others.

Once loaded into the grid, destinations are assigned through drop-down menus. The number of destinations depends entirely on how many modules you have inserted into Quiver's various signal paths.

Once assigned, an amount knob appears. Those that can be applied to pitched destinations give their values in semitones, making it straightforward to set up musical fluctuations in pitch.

Quiver's Performance page is the place for assigning incoming MIDI controllers to various destinations. Any ten of 100 available controllers can be assigned via dropdown menus. You can choose between polyphonic and legato playback modes here as well.

Though we have voiced some minor reservations about Quiver, it's important to understand that it's early days yet for this great synth. We expect the instrument to expand and improve over time.

Nevertheless, the most important factor here is the sound - and it's hard to complain about that! The presets give only the vaguest hint as to the instrument's versatility and say very little about just how very good it can be.

Quiver can sound big and brash or rich and lush. There's plenty of power on hand to craft truly breathtaking timbres and the interface does everything it can to not to get in your way while you do it. In our opinion, it's easily worth the asking price.