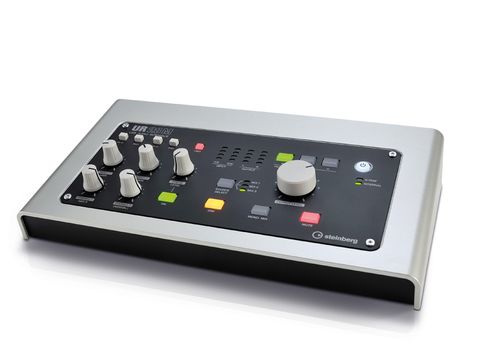 A versatile interface that, alongside the enclosed software, makes for a great DAW system.

Although best known for their Cubase and Nuendo DAW software, Steinberg have a history of releasing closely related hardware products. This has been brought largely in-house since Yamaha bought the company, and continues to bear fruit in the audio interface arena.

The new UR28M is younger brother to the more sophisticated UR824, and unlike the CI1 and CI2+ interfaces from last year is USB 2.0 in nature (rather than the less efficient USB 1.1). It also adds the enticing prospect of on-board DSP, first seen in the well-regarded MR816CSX three years ago.

From the moment you open the box and take a peek at the front panel of the UR28M, it's clear that the Steinberg's intent was to focus on streamlined input management allied to comprehensive, and hands-on, monitor selection capabilities. Will the results live up to this promise?

The UR28M feels sturdy from the start, with its half-plastic, half-metal construction. Although a USB device, it requires the use of separate mains adaptor that, despite the unit's modest size, immediately places this sound card in the non-mobile category. In fairness the there is no allusion, on Steinberg's part, to the unit being mobile, and while it will fit in a small bag, the UR28M is most definitely a desktop device.

Having plugged-in the unit and installed the enclosed Tools software, we booted up Cubase 6, and were up and running immediately. When used with Cubase 6 or the included, feature-trimmed, 'AI' variant, most of the under the hood mix and routing functionality is incorporated into the standard workflow in a streamlined and efficient way.

Of course, you get a full copy of Cubase AI6 with the interface, so out of the box you have a fully integrated DAW system. Taking a close look at the hardware itself, the front panel integrates three input level controls, two independent headphone level knobs and a large output level control.

The first two inputs cater for mic, line or high-impedance signals and include microphone phantom power and level pad options. Interestingly, a configurable high-filter can be turned on via software. The third input (labelled 2 Track-In) is fed by the back-panel 3.5mm socket - perfect for laptops and iPods.

The rest of the unit's facia is dedicated to levelling and monitor mix configuration and selection. In fact, the UR28M is very flexible in this department, as it is possible to configure three different monitor mixes and switch between them at will. These can then be linked to a one of the three main outputs.

Alternatively, the three output buttons can be used to simply switch the main mix between different sets of speakers. The ability to route an alternative monitor mix to the second headphone output makes for a comprehensive system that should find particular favour with those doing vocal recording.

The output section conveniently adds Mono Mix, Mute and Dim buttons. It should be added that although many of the switches are of the non-latching variety, there is plenty of visual feedback from the variously coloured backlighting.

All the cable connectivity takes place on the back panel, though it would have been useful to have the headphone sockets duplicated on the front panel for added flexibility. On the back we also get an independent S/PDIF connection, which can also be used for external digital clocking (switched from the software panel).

Digging deeper, we come to the software side of the package. Whether accessed through Cubase or, when using another DAW, via the 'dspMixFx' software you will discover a whole additional side to the UR28M.

Hidden under inside its case it has a custom Yamaha DSP chip that hosts the mix engine a REV-X reverb processor and six Sweet Spot Morphing Channel Strip plug-ins (see box on the previous page). These are run within the interface and therefore offer near-zero latency, even at large buffer settings. In fact the dspMixFx control software allows you to peak into the interface's integrated mixing system in detail, providing lots of flexibility - you can even adjust whether the channel strip plug-ins are applied to the recording path or just for monitoring.

As a bonus the reverb and channel processing plug-ins are also installed on the host computer in their VST3 guise allowing you to add as many instances as you want to your DAW mixes.

The Getting Started booklet gives little clue as to what goes on under the bonnet of the UR28M in processing terms. In fact, I'm surprised that Steinberg doesn't make more of this. However, the flipside to this, and the unit's overall flexibility, is bouts of occasional head-scratching when faced with selecting the right mix source or routing methodology. This is perhaps compounded by the size of the dspMixFx control software window.

In hardware terms, the UR28M is a pleasure to use, and is capable of quality results when recording simple sources. If you require full multi-mic capabilities then you will need to look elsewhere, but as a flexible and high quality desktop recording hub, this unit is well worth exploring.