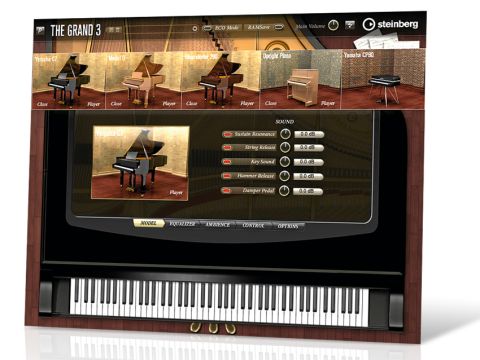 The Grand 3 offers a winning balance of quality sound and flexibility, with the CP80 being the star of the show.

Recent virtual piano instruments, such as VSL's Vienna Imperial, demonstrate just how far things have come in the four years since The Grand 2 appeared.

Sample sets with tens of gigabytes of data per piano, multiple velocity layers and mic positions galore are now standard fare, and The Grand 3 follows suit, with its losslessly compressed library taking up 32GB of drive space (the data would be 80GB uncompressed).

The Grand 3 comes in both standalone (including MIDI record/playback and a metronome) and plug-in formats (AU and VST, but not RTAS or DXi). It supports ReWire, too.

On to the interface, then, which includes Player and Editor views - in the latter, parameters are arranged across five tabbed windows (Model, Equalizer, Ambience, Control and Options).

Within the Model view are options to tweak the sample sets used. These are most extensive for the three grands and include sustain resonance, string release, key sound, hammer release and damper pedal. For the CP80, these options are replaced by two effects: tremolo and modulation (chorus, flanger or phaser).

Further options include a fine convolution reverb based on Cubase's REVerence and a multitude of tuning and MIDI control options, including everything from velocity curves and polyphony behaviour to scale types and stretched tuning.

The Grand 3 also includes a number of features to conserve RAM, with the performance meters in the top-right corner indicating memory use, as well as CPU, disk and voice statistics.

Eco mode reduces the loaded velocity layers to seven; for the Steinway D Player model, this reduces the RAM hit from 635MB to 306MB. Additionally, there are four settings to adjust the balance between disk streaming and RAM. Finally, removal of the aforementioned model settings, such as sustain resonance, also saves on RAM. In Eco mode, with none of these loaded and the maximum RAM/disk ratio, we got RAM usage down to just 75MB for the Steinway D.

The other useful feature is RAMSave: click once and The Grand 3 'tags' the notes/ velocities that are played - click again and it unloads the samples that aren't used. This is a feature we've seen on other sample-based instruments, and it can be extremely useful when your computer is maxed out.

The Grand 3 is a massive step up that puts it on a par with the competition, with the slick interface's five-tab system keeping things uncluttered. As with most large ROMplers, load times can be slow, and we found this most annoying when switching additional sounds such as resonances in and out.

It's also fair to say that with only two mic perspectives, it falls short of some of its contemporaries in this respect; however, where it does win is on flexibility. Whether it's adjusting MIDI response, tweaking options such as repedalling, positioning the piano in either stereo or quad ambiences, or modifying the RAM-saving options, the Grand 3 has much to offer.

In addition to the three grands, you get an upright, adding extra flavour, and the CP80. This last option combined with its own effects is one of the nicest versions of this classic we've heard. Admittedly, it's a bit of a one-trick pony, but in the right context, it's a brilliant and distinctive sound.

The Grand 3 is clearly ploughing its own furrow, with more variety than some piano ROMplers but a less over-the-top sample set. Sonically, the grands don't quite match the best we've heard, but they aren't far off, and the CP80 really stands out. Overall, a big thumbs up.

Our The Grand 3 audio demo contains:

1. ECO mode for the Steinway D: A single note with gradually increasing velocity first using the full model and then in ECO mode with no extra articulations. In the second example the transition between velocity layers is more obvious.

6. CP80. First flat then with phaser, then chorus, then flanger, then tremolo, then tremolo plus phaser plus 'NY Studio a' convolution.