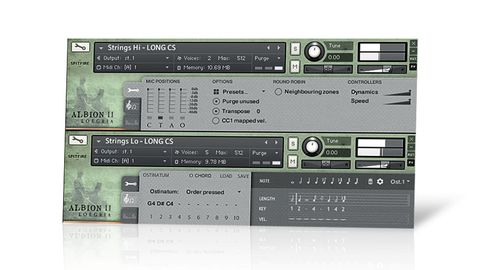 Realistic, characterful and expressive - this quirky set of orchestral instruments is nothing less than inspirational.

Bringing together some of London's finest musicians and some of the rarest, most treasured orchestral instruments in the world, Albion II (Kontakt/Kontakt Player) goes somewhat deeper than its predecessor by providing a less 'universal', perhaps more interesting set of ensembles (around 50GB of losslessly compressed samples in total), recorded at Air Studios' Lyndhurst Hall through a collection of vintage mics onto 2" tape.

The headline act is the chamber-sized string ensemble, presented in High and Low variations over a range of multis, with a maximum of four round robin variations (although 'neighbouring zones' can take this up to 12).

A good range of articulations are included, and all of them are loaded with each patch at the same time, with keyswitching used to move between them.

The rest of the Albion II orchestra comprises the less mainstream likes of sackbutts, recorders and euphonia - not as generally useful as the strings, but all a lot of fun and certainly worthy of inclusion.

Even more quirky than that lot, though, are the quartet of other included libraries. The Byron Tapes are Spitfire's fabulously rough-edged ensemble-based homage to the Mellotron's famous rhythm loops; the Darwin Percussion Ensemble brings together a huge weight of drums and metalwork to spectacular effect; Stephenson's Steam Band II turns the source instrumental recordings into dark, funky rhythmic pads; and the Fenton Reversals comprise a series of cinematic transitional risers.

Four mixable mic channels have been recorded - Close, Decca Tree, Ambient and Overhead - and the Ostinatum Machine 2.0 is a Kontakt scripted step sequencer for short riffs and flurries.

If you want to get interesting soundtracks together in a hurry, Albion II sounds absolutely knock-out. Less 'involved' producers might want to check out the more broad-based Albion I first, although if money's no object, the two together would be truly extraordinary.