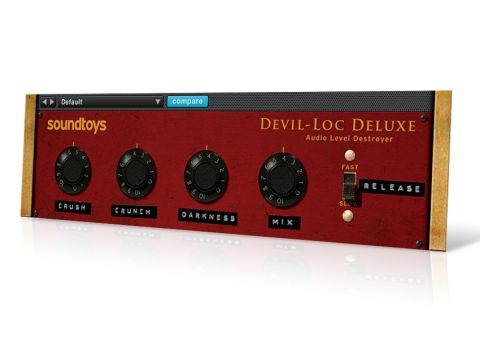 Another analogue modelled hit from SoundToys, and one that's particularly delightful on drums and loops.

As with SSL's famed talkback compressor, Shure's Level-Loc Audio Level Controller is a functional device that's been exploited for its highly audible and characteristic limiting/compressing artefacts.

SoundToys has taken the essence of the Level-Loc's sound, moulding it into a more traditional dynamics format presented as two separate plug-ins: Devil-Loc Deluxe and the simpler Devil-Loc. Both are in VST, AU and RTAS formats.

The original hardware had a simple switchable mic distance setting; this has been replaced with more flexible options. The main controls are Crush (compression amount) and Crunch (makeup gain). In the Deluxe version, they're complemented by Release (fast/slow), a post-Crunch low-pass filter (Darkness) and an output mix control for parallel compression.

In line with other units of its time, the Crush control is effectively driving a fixed threshold FET-based gain reduction circuit. With a high signal level and enough drive, it's possible to saturate the FET circuit, increasing the release time and creating very audible pumping compression.

However, you also have the option of driving the transistor output stage using the Crunch control, yielding increased distortion.

The processor's attack time is fixed (1.3ms), but the two release options combined with saturation levels deliver times as short as 0.85 seconds and as long as 22 seconds.

SoundToys doesn't specify the post output low-pass filter characteristics, but we measured this as down to about 1500Hz with a pretty gentle slope. With all controls flat and winding up the Mix blend from zero, the scope also revealed that Devil-Loc Deluxe has a subtle low-frequency thinning effect.

Unsurprisingly, our first target was drums, and the Devil-Loc did an excellent job of bringing up the room in our overheads. Even so, we really didn't need to push the Crush control too far, and a subtle Mix blend (3 or 4) was enough.

Moving onto individual drums was a revelation. Snares, toms and kicks were all easily fattened up using a combination of crush and crunch controls. The attack time is nowhere near as fast as some FETs (UREI 1176, say), and this combined with a subtle Mix blend (2 or 3) maintains transients while pushing up the decay and room sounds.

With some careful processing, you can really bring out a drum kit's room ambience without using distant room mics, thus maintaining a tight but pumping, exciting sound.

We think that the area in which Devil-Loc Deluxe really shines is percussive loops. A loop's more regulated, predictable nature enables you to fine-tune the plug-in's response, bringing out subtleties in the release stages of elements, adding excitement - even sculpting the top end using the Darkness control - and blending in just the right amount using the Mix knob.

Crank up the settings and you can enjoy some satisfyingly disgusting distortion that will erase all traces of sonic politeness. The only caveat we have is that you have to watch your source levels, as with no input level trim, you may find that the signal is affected even at zero settings.

Overall, we think Devil-Loc Deluxe is a very useful plug-in with real flavour - there are few others that sound quite like it.

Now listen to our audio demo to hear:

Drum kit: Flat then just snare, adjusting crush, crunch and release settings and then setting a mix blend. Adding in kick drum and doing the same, then toms and hat. Then adjusting settings for the overheads. Rebalance kit elements then bypass all Devil-Loc plug ins to compare.