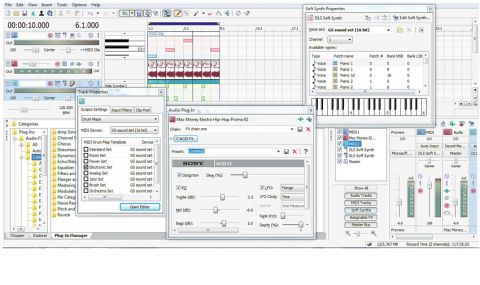 Acid is still great at timestretching and warping audio, and v10's new features are pretty solid, but that interface has got to go.

In 2014, Sony's venerable Acid Music Studio - an affordable off-shoot of the big 'un, Acid Pro - feels like the black sheep of the budget DAW market. It's full of creaking idiosyncrasies, and its GUI looks archaic, yet it still has its place.

For many, that place is as a secondary DAW, thanks to its excellent, intuitive timestretching capabilities, which unarguably punch above its budget price point. As an entry-level music application, however, Acid is something of a mixed bag.

On one hand, it offers all the tools required for basic recording and loop-based composition at a bargain price. It features multitrack audio and MIDI recording, editing and automation, built-in effects, a SoundFont playback synth hosting a range of instrument and drum sounds, a decent mixer and more, all at a price you'd expect to pay for a single plugin. It even features a video window, making it a viable option for basic soundtracking.

However, all this is housed in an application that feels like it's been underdeveloped for a number of years. As a result, Acid feels disconnected from everything else in the sphere of digital music making, with the exception of its bigger sibling Acid Pro 7, which offers a more complex, expensive and fully featured package based around a similar interface - but Pro hasn't had a proper update since 2008.

While its simplicity and familiarity are likely to be its biggest selling points for many users, it's hard to look at Acid alongside its peers without feeling that its in desperate need of a visual makeover. With a grey and white colour scheme, boxy design and heavy reliance on checkboxes, sliders and dropdown menus, editing parameters often feels more like adjusting the difficulty settings of a game of Minesweeper than making music in the 21st century.

Despite this, Acid Music Studio is very easy to use, but - as many rival entry-level DAWs demonstrate - usability and contemporary design certainly don't have to be mutually exclusive. This lack of cohesion is made even more jarring by one of Acid's best features: the excellent interactive Show Me How tutorial window, which provides a clear and concise hands-on introduction to the main elements of the software.

In terms of new features, version 10 is about subtle - albeit, in places, meaningful - additions as opposed to fundamental change. Top of the bill is the ability to freeze MIDI tracks, which is a standard function in any modern DAW. Even though Acid itself is relatively easy on the host CPU, running multiple instances of its built-in synth can slow things down considerably, and VST plugins are a potentially resource-hogging law unto themselves, of course.

Furthermore, one interesting addition is the ability to attach effects chains to individual audio clips (or Events, as ACID calls them) as well as complete tracks. This clever little feature comes into its own when working with loops, providing a quick and easy way to create, for example, filtered breakdowns and one-shot delay spins without the need for automation. You can also now group Events across multiple tracks, meaning that a whole section of an arrangement can be 'tied' together and moved or copied as a single object.

Elsewhere, v10 introduces a MIDI drum map editor, which, while a helpful tool for sequencing drum parts, feels outdated and clunky with its checkbox-based interface. MIDI filtering has also been brought in, enabling you to specify exactly what data is and isn't captured when recording via a MIDI controller - velocity, aftertouch, pitchbend, etc. Rounding things off, version 10 can now run at up to 24-bit/192kHz and you also get track export direct to SoundCloud.

Acid comes bundled with several thousand loops and a pair of third-party VST plugins: TruePianos Amber Lite and Studio Devil British Valve Custom. Of these, however, the later is a free download anyway, and whilst the sound content adds a little to what's already a good value package, it's all a long way short of essential.

The loops come arranged by instrument and style, covering a fairly broad range, but they're functional rather than inspirational. They might be of use to home recordists for fleshing out demos or improvising around, but they're unlikely to serve much purpose beyond that.

Of the two plugins, meanwhile, one is a 'lite' version of decent, if rather generic, virtual piano and the other is an amp sim which is available for free anyway. They're likely to be of some use to beginners, but neither stand as particularly strong added incentives to buy.

While it would be easy to be negative about Acid's more obviously clunky and dated elements, it works well enough and there's no denying that it's very well equipped for the price - worth the entry fee for the timestretching and beat grid capabilities alone, in fact.

It qualifies as a complete production system for those anting to dabble in music production on a budget, but its decrepit interface really lets it down and certainly wouldn't prepare the novice for the eventual step up to a higher-end DAW.