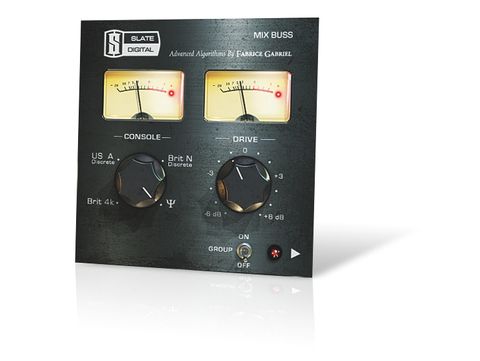 Virtual Console Collection (VCC) has been a long time in development, and though it finally made it out of the gates in March 2011, there were teething problems, with much bug-busting still to be done. We're evaluating the latest version (1.2.3) and we're pleased to report that it worked without a hitch for us.

The plug-in is in VST format for Windows and AU, VST and RTAS for OS X.

VCC offers four desk models, named Brit 4K, US A, Brit N and the last represented by the three-pronged Greek letter pi. It's easy to deduce that these are SSL, API, Neve and Trident designs respectively.

There are two plug-ins in the package: Virtual Channel and Virtual MixBuss. You put the former on all source channels in your mix, and the latter on group buses and the master bus. You can drive them harder using the Input and Drive knobs - they have the same sonic effect, but the former also increases the level.

If you drop VCC on just one channel, you almost certainly won't hear any difference.

However, the accumulated effect from sticking it on all of them is of subtle enhancement and gentle dynamic control, making it easier to achieve a smooth mix where everything sits in its place. Like an analogue desk, you have to push levels hard before saturation is audible.

One of VCC's biggest novelties is the ability to mix and match channels from different desk types. Still, at regular levels, we found that using the SSL channel on a drum kit with a Neve-treated string section was practically indistinguishable from a fully SSL setup.

This is to be expected considering that real consoles are typically designed to be as clean and transparent as their analogue circuitry allows. As you drive levels, the differences become more obvious, with the SSL and Trident being the most coloured.

Sonically, the Trident offers the least hi-fi sound (and most hiss), with the API crisp and upfront, while the Neve handles extreme signal levels with the most ease. The Neve also noticeably enhances the bass.

On the downside, CPU usage can be considerable. On our four-core Intel Xeon 3GHz-equipped Mac, running 64 Virtual Channels brought the CPU meter up to the halfway mark.

Note that the MixBuss plug-in is more CPU-intensive and that oversampling will increase the CPU load further. However, the treble sounds excellent in the 8x oversampling mode.

In use, we found VCC very rewarding and with a valve desk model in development, there's clearly more to come.

We should point out, though, that VCC isn't a magic bullet that'll make mediocre mixes sound majestic. If you're still getting a handle on mixing, you'd be better off investing in bread-and-butter plug-ins first, such as quality EQ, compression and reverb.

For more experienced engineers looking to take their mixes to the next level, though, VCC could be revelatory, and we have to praise Slate Digital for bringing a new level of nuance and flexibility to the 'console in the box' concept.