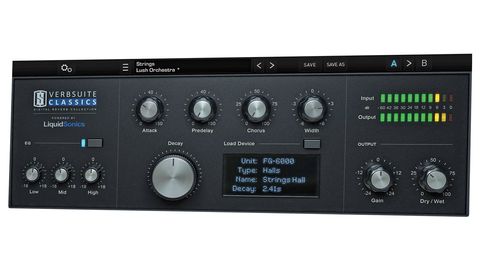 With its simplicity being, mostly, a positive, VerbSuite Classics takes convolution to new heights, delivering the essence of eight of the finest reverbs of all time.

Slate seems to be on a 'partnering' drive at the moment - as well as collaborating (to an unspecified extent) with D16 on Repeater, it has also recently joined forces with LiquidSonics to create VerbSuite Classics (VST/AU/AAX).

Coincidentally, like Repeater, this also aims to emulate a range of legendary hardware effects - reverbs, this time, rather than delays. It can be bought outright, or - the vastly preferable option, in our opinion - as part of Slate's ever-expanding Everything Bundle for a $14.99/month or $149.99/year subscription.

Crucial to successful virtualisation of any high-end digital reverb is reproducing its modulation characteristics, and Fusion-IRs make that possible. Of course, they're also much bigger than regular IRs, so VerbSuite Classics demands a hefty 2GB of space for the default seven Fusion-IR packages, plus another 10GB for the optional Bricasti M7.

For such a seemingly high-concept plugin, VerbSuite Classic's interface is surprisingly simple. The Fusion-IR is loaded via a rather annoying hierarchical menu series that, thankfully, is scheduled to be replaced with a proper browser in the near future. Starting with the reverb unit itself, you drill down into its various captured presets or configurations - FG-2016/Plate Reverb/Plate 0.2s, for example, or FG-480/Wild Spaces/Big Bottom.

The Decay knob is then used to scale the length of the tail to anywhere from 25-130% of its original length, while the Attack and Predelay controls fade and offset the reverb by up to 150ms (to be raised to 350ms, we're told). For stereo widening and thickening, the Width knob adjusts the level of the M/S sides component, and the Chorus knob dials in a pitch-modulated, delayed signal.

There's also a no-frills EQ, comprising a Low shelving band at 460Hz, a Mid bell at 3kHz, and a High bell at 12kHz - useful, but it would benefit immensely from the addition of low- and high- pass filters. Gain, Dry/Wet mix and A/B comparison controls complete the picture, along with a modest library of presets.

Between them, VerbSuite Classic's eight Fusion-IR libraries take in 40 years of digital reverbs, and although Slate doesn't name any, the names and sounds give the game away.

FG-250 is the EMT 250, the world's first digital reverb, released in 1976. FG-480 is the Lexicon 480, famous for its beautiful modulation and still considered by many to be the greatest reverb ever made. FG-16X captures the versatile AMS Neve RMX-16 - instrumental in the sound of the 80s.

FG-2016 brings the high-gloss Eventide SP2016 from 1982 to the modern DAW. FG-QRS is the rare and beautiful Quantec Room Simulator. Sony's characterful DRE 2000 from 1981 is represented by FG-2000. FG-6000 is the spatially convincing TC Electronic TC6000. And last but... well, most, the BM7 does an incredible job of replicating the Bricasti M7, and is provided as a free expansion pack using the public domain LiquidSonics responses.

VerbSuite Classics is essentially a heavily reduced version of Reverberate 2. The stripped-down interface is much more direct and easier to use than its supercharged cousin, making VerbSuite Classics thoroughly unintimidating and quick; but obviously, the only emulation taking place is in the impulse responses themselves, with the homogenous control set enabling only basic sound shaping and offering none of the actual parameters found on the original hardware units.

In use, however, that rarely feels like a bad thing, and those eight Fusion-IR sets are very much the story here. Ironically, the public domain Bricasti is the best of the lot, but all of them are truly outstanding, serving up a wide range of breathtaking spaces and ambiences. Ultimately, VerbSuite Classics stands as another very compelling reason to take the plunge with Slate's increasingly good-value subscription.