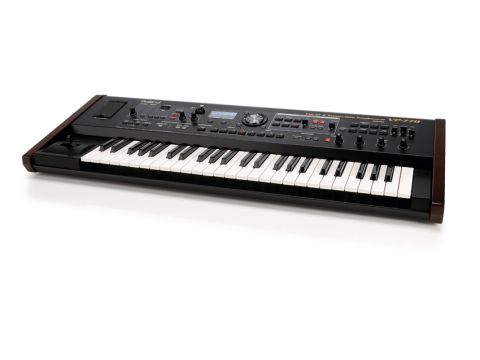 The VP-770 has little competition and delivers highly realistic backing and vocoded vocals.

Launched at NAMM 2006, the VP-550 has a reputation as perhaps the best vocal production keyboard currently available.

Seamlessly blending a vocoder, realistic vocal backing, a good set of ensemble sounds and a foolproof interface, the VP-550 has confirmed Roland as a key vocal keyboard technology player.

Cosmetically, the VP-770 is significantly different to its predecessor, sporting many new controls, a new LCD display (there was no LCD on the VP-550), a jog wheel, a USB memory stick slot and an altogether more classy looking design.

First impressions are very good. The VP-770 is reassuringly heavy and seriously 'pro'. With its solid metal chassis and some vintage 2009 wood end panels, it feels like it could stand any abuse thrown at it.

All this adds up to a classy, high quality feel. The keyboard is also very playable and now has channel aftertouch for applying pitchbend, modulation, volume changes and other functions.

On the very left of the keyboard is a USB slot that allows backup of preset registrations, sound looper phrases, system backups and playback of audio files in WAV, AIFF and MP3 formats.

Any audio file can be assigned to the lowest 15 notes of the keyboard for playback using the nifty Audio Key feature - great for solo performers. You could bring backing tracks for a song in its component parts and trigger the chorus from one key, intro from another and end from another and so on, almost like a very simplified Ableton Live.

Below the USB slot are the familiar Roland pitch bender and two new assignable buttons for mode switching and effect control. The main control section contains the volume control, a V-link control (for controlling video images in sync with your music when connected to other V-link equipped gear) the also familiar D-Beam for controlling pitch, filter or expression and a new phantom-powered XLR/ combo mic input. This is a great addition to the keyboard and means any type of mic can be connected. There's also an external audio input.

We're pleased to report that the included headset mic works well, picking up all the inflections and diction required for realistic vocoding, while the new mic preamp does a great job without introducing any noticeable noise.

What's also cool is that you can add compression, a noise gate or EQ to the input, too, though it would have been nice to have a few more effects on board. Surely at this price Roland could have squeezed in a chorus, phaser, flanger and delay at least?

The Sound Looper is a handy new tool and expands on the Soundcheck feature from the VP-550. We can see this being a hit with solo performers who like to create on the fly. Anything routed through the VP-770 can be captured and looped, be it dry or vocoded vocals or the ensemble sounds.

Once you've set the length and speed for the loop, simply hit record/play and off you go. Then it's just a question of overdubbing layers as required by pressing the rec/play button again until you've added all the layers you need. You can then use these loops as beds for soloing over with the ensemble sounds or trigger them using the Audio Key feature. The maximum recording time is 18 seconds.

Other goodies onboard include the ambience (reverb) feature, which offers two types of hall and one studio reverb (the quality of these is decent and can really bring sounds to life), There are also some very playable brass ensemble sounds onboard - these are taken from Roland's Supernatural ARX-03 brass card. There's also a Voice Expression function for imparting the vocal intonation onto the ensemble sounds.

It's worth noting, too, that there are more preset registration buttons for recall of front-panel settings and sounds (16 preset and 16 user) a vibrato section (with vibrato delay, rate and depth) and new tone, attack and release sliders in the Ensemble section for sound shaping.

These new functions are never more than a few button presses away and menu diving is kept to a bare minimum - the new operating system has been very well thought out.

Now the most important bit - the sounds! The vocal designer section is simple to use and covers pretty much every type of vocal sound you'll ever need. The quality really is astounding throughout and we think it's fair to say that these are the best vocal group and digital vocoder emulations we've ever heard in a keyboard.

All the modes from the original VP-550 are included and have been improved (Classic, Male and Female, Gospel, Pop, Vocoder) and there are now several variations for each type of vocal section.

These really have to be heard to be believed - you could easily build realistic backing vocals for your tunes with just this keyboard. The vocal design engine picks up on every nuance in your voice and always sounds natural.

As a bonus, there's a new background vocal mode that adds very in-tune backing parts to your vocal. There are also some new 'auto harmony' generation features built in, with several modes.

Finally, the ensemble sounds are a useful addition and can be switched in or out as needed. They can be split and layered with the vocal design sounds too. Strangely, there's a complete lack of bass sounds on board (unless you count the vocal bass sounds which have limited scope).

All in all, this is a versatile and highly-capable vocal ensemble keyboard that produces high-quality results with little fuss. As an all-in-one solution for realistic vocoding and backing vocal creation, it's hard to beat and it's great fun to use.

Our biggest reservation is the steep price - Roland has been a bit stingy with the available onboard effects when you factor this in, and there's also the lack of bass sounds to consider. These gripes aside, the VP-770 is very worthy successor to the VP-550.