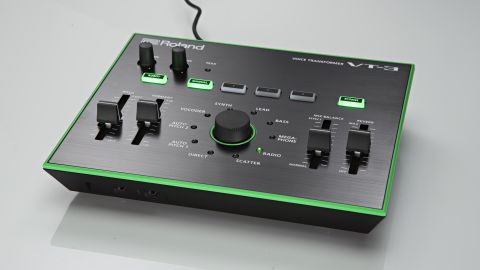 There are some interesting effects and a handy audio interface onboard but the vocoder misses an external carrier input.

Roland's BOSS VT-1 Voice Transformer has gained something of cult following in recent years, having been used on hit tunes and albums by major acts including The Knife and Air.

Though the old VT-1 was pretty limited, many artists and producers found ways to get really unique sounds out of it, running not just vocals through it's effects but pretty much any other available audio material too. Second hand prices for the VT-1 have recently been hitting the £300 mark but as the new VT-3 is just £159, that's starting to seem pretty steep!

The VT-3 is unmistakably an AIRA product. It has the same solid build quality, sleek looks, green lights, brushed black aluminium front panel, black plastic case and green day-glo trim as its TR-8 and TB-3 siblings and it's also very compact too.

The VT-3 doesn't stray far from the VT-1's concept in terms of functionality and the hardware itself - in fact it's strikingly similar if you compare the two, though thankfully the garish orange and blue colour scheme has departed!

For starters, there are the same four front panel sliders - Pitch which has a one octave range in either direction for turning your voice into a mouse or a deep voiced Lothario, Formant which effectively turns a male into female and female into male, a Mix Balance fader which balances the amount of effect with the dry signal and a Reverb fader which does what it says on the tin!

Then there's the Robot button, which was also found on the VT-1 that turns your voice into a monotone vocoded and indeed robotic voice that can then be processed using the faders to get all manner of evolving alien effects.

In order to liken this Robot effect to something you'll recognise, check out the Beastie Boys track Intergalactic, which sounds very similar to the VT-1 and 3's effect, even though it was done on a different brand of vocoder. Regardless, Robot is a well-known and classic VT-series effect and we're glad it's included here in all its glory.

The first major difference you'll notice between the VT-1 and VT-3 is there's a large dial slap bang in the centre of the front panel surrounded by green LED's to signify which of the new effect modes is selected. This is a big improvement over the VT-1, which only had the Robot mode, along with the 4 faders already mentioned.

In addition, there's now a volume control (which was strangely absent from the VT-1) and the input level control has now been renamed Mic Sens and moved round the front next to the peak input light for easy tweakability.

The user/preset system has also been revised and now, instead of 4 user slots, there are 3 scene buttons (labelled 1, 2 and 3). Simply press and hold one of these buttons to save a snapshot of all front panel settings. The genius thing here is that you if you save 3 scenes with deep, high and medium pitched voices, you can flip between them and effectively have a multi-gender conversation with yourself!

The Manual button puts the front panel into live mode, where the sound you hear reflects the actual position of the 4 faders and the effect type selected. You also can bypass the effects at any time by hitting the Bypass button, which can also be controlled from a footswitch. This is great for solo instrumentalists whose hands are often tied up playing a guitar or a keyboard.

In use, the VT-3 is great fun just like the old VT-1 and in particular, the new Synth, Bass and Lead modes (that turn your voice into a synth, bass or lead sound) are great for anyone who wants to record or perform synth lines but that can't play a keyboard.

Then there's the Scatter effect which is great for real-time chopping and twisting of audio and beats, plus the onboard reverb sounds great on all sources, though it's a shame you can't alter the time, size or type.

The VT-3 is in its element when you start pitching up or down beats/instruments and samples or when you want to harmonize with yourself, plus the effects such as Radio and Megaphone though clichéd, are handy to have on tap.

Surprisingly though, it's the new Autopitch and Vocoder effects that are the weakest - not in terms of sound so much but in terms of implementation. For example, whilst the two Autopitch effects can pull off convincing auto-tuned/pitch-corrected vocals, ironically you have to be able to sing in tune to get the best out of them, as the pitch correction doesn't like out of tune voices - and this was after trying different mic's and signal levels.

Then there's the Vocoder effect which has a classic vocoder tone but as there's no internal pitch correction on the Vocoder preset and no way to use an external input source to the carrier signal, all but the best vocalists will struggle to keep the effect on the correct notes!

In practice this means you can't get those classic Vocoder or Talkbox effects, as they require an instrument and mic signal simultaneously. This is real shame, as most of the VT-3's competitors have this feature.

To sum up, the VT-3 is a mixed bag. It's certainly fun messing with your voice, it's a great box for voice-over artists and the built-in USB Audio interface is a real bonus. However, for pitch-challenged singers (like us), the Autopitch and Vocoder presets are a little disappointing compared to the competition.

Having said this, the VT-1 became a classic and the VT-3 beats it hands down, so who knows what might happen once some forward thinking artists start abusing its effects!