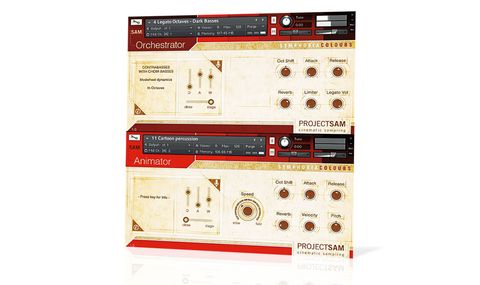 Animator and Orchestrator both sound stunning and couldn't be easier to use. They are aimed at pro media producers, though, so are still quite pricey.

ProjectSAM's Symphobia series of orchestral Kontakt libraries are as expensive as they are extraordinary, so the arrival of the more affordable Colours sub-range is welcome news.

These smaller, more focused collections use the same orchestra, hall and scripting as Symphobias 1, 2 and Lumina, and the first two releases - Orchestrator and Animator, reviewed here as a bundle - deal with orchestral chords and cartoon soundtrack instrumentation.

To facilitate this, all major and minor chords were recorded along with all possible transitions between them. It works well, although only four instruments actually use it, one of them non-chordal. The other five map out the same chords, but with regular legato transitioning between them.

The scripted Kontakt interface doesn't offer a great deal in the way of sound shaping, but the three mics and Attack/Release controls are certainly handy. Orchestrator's main strength lies in how absurdly easy it makes the job of constructing powerful, sonically rich chord passages - which it accomplishes at the obviously necessary expense of flexibility.

Animator is a true work of genius, its 18 instruments (1.8GB) flawlessly resurrecting the sonic spirit of the Warner Bros. cartoons of the 40s with a truly hilarious grab-bag of slapstick sounds: plinks, plonks, trombone slides, cheeky phrases... you get the picture. Again, the scripting is minimal, but the Speed control is good for timing tweaks.

Animator and Orchestrator both sound stunning and couldn't be easier to use. They are aimed at pro media producers, though, and thus are still quite pricey; and Animator - as fabulous as it is - is very niche indeed, so we'd recommend checking it out separately before shelling out for both.