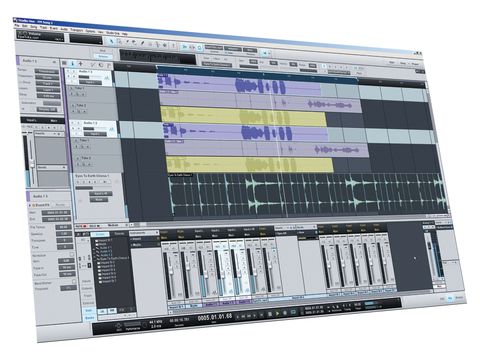 A few niggles remain, but overall version 2 turns Studio One into a formidable DAW.

Two years ago we took the PreSonus Studio One DAW for a test drive and were suitably impressed. Despite some shortcomings about the depth of features, it was clear that Studio One had the potential to become a top-flight piece of software with a little more development.

This brings us to the new, and even more numerically potent Studio One 2. As before, the single screen focus remains - the designers' intention being that you should be able to access most features from the main window. On first glance we still had the impression, visually at least, of viewing a Logic/Cubase hybrid, though perhaps now with an added dose of Reason 6 - incidentally none of this is meant in a bad way!

The headline news regarding Studio One 2 (for the sake of sanity lets call it SO2 from now on) is the inclusion of 'Integrated Melodyne Pitch Correction' processing - which we'll explore shortly - though there are a quite a large number of other significant feature additions (and many minor ones).

The daddy of this range remains SO2 Professional, though the 'Artist' version has been joined by the intermediate SO2 Producer. It should also be noted that SO2 has come down in price a little since version 1, but 'Artist' has plummeted from £199 to £82.

This time round we received our Studio One license online, and as such had to download it from the internet (as well as all additional content). Installation was quick and easy, with a simple online registration process, and no dongles in sight.

Adding content is very straightforward; SO2 asks what you wish to download and install automatically on first running the program. As well as wide selection presets for the built-in SO2 instruments, you may install a number of loop collections and third-party samples, including some new V2 additions.

The extras this time also feature Native Instruments Komplete Elements 7 (replacing the NI Kore Player from before), but there's no EZ Drummer Lite or Guitar Rig LE this time. The other important component is Melodyne Essential, which needs to be installed in order to enable the integrated Melodyne features in SO2.

Incidentally, Studio One didn't come with a manual even in its earlier incarnations, so the only thing missing from the downloaded product is the physical installation media. It's up to you to decide if they are worth the additional cost (£30).

Getting stuck into SO2, you're likely to receall how easy the original Studio One was to use, and there is nothing radically different on the visual front to change this. Recording audio and MIDI is easy to set up, and logical in use.

Incidentally, SO2 is one of only a few DAWs that enable you to make edits to existing tracks while recording new ones. The new Comping features using Layers makes assembling takes very easy. Folders facilitate bundling tracks together for convenience.

Much like Cubase 6, folders can also be used to group tracks together for editing, making multi-track comping a piece of cake. A quick key press away is Melodyne time and pitch editing, and unlike many other similar solutions, no pre-processing audio transfer is required.

The Melodyne window opens within SO2 and updates any audio tweaking instantaneously. While Steinberg may have got here first with VariAudio (integrated into Cubase 5), this is a marriage made in heaven, and will surely be the envy of many other DAW users. In fact, if you own the full version of Melodyne Editor (not the cut-down 'Essential' version included here) you will even have integrated access to its polyphonic 'DNA' algorithm.

Another addition in the audio editing stakes are event-based effects. Each event is give its own insert rack for adding effects. This is a great feature and enables you to create some incredibly detailed, or even downright crazy, effects treatments.

The new Track Transform option - a form of freezing/rendering - extends to the Instruments Tracks and even these new Event Effects. Incidentally, these newly 'frozen' tracks can be edited at the audio level - unlike some DAWs.

Bend me, shape me

We tested the new transient detection features by attempting to quantise an imported drum loop. In fact, this was only a few simple mouse-clicks away.

The Audio Bend features expand on this, and enable you to stretch and squeeze your audio to fit all manner of scenarios, much like the 'Flex' features of Logic or 'Warping' in Cubase (in fact the same superb zplane algorithms are used here).

We also really liked the Groove Extraction tools on offer, which simplify the process to such a degree - 'drag', 'drop' and 'click' - that they make experimentation quite painless and a lot of fun

Navigating a project has been made even easier, with the addition of the Track List, though even without this Studio One was clear and easily navigable DAW. This is especially noticeable when it comes to the way in which the Mastering facilities are integrated into a Project - the Project in this instance being a collection of Songs.

Studio One automatically manages revised Song mixes and updates them in any Project that uses them. SO2 includes some new mastering options, including DDP Export support, PQ editing and better sample-rate conversion. Add the expanded SoundCloud features (now integrated directly into the Browser) and you have some serious post-production delivery functions.

In the air tonight

Alongside a number of smaller effect tweaks and additions, we also have OpenAIR, a convolution reverb. This is a form of processing that utilises 'captured' impulse responses (IRs).

IRs are usually created by playing a short noise burst or full-range sine wave sweep into the space to be captured. This is then recorded and processed so that it may loaded into OpenAIR or other similar convolution-based effect.

This process is a great way of distilling the reverberation charact-eristics of a real space into a digital plug-in, but can also be used to steal the sonics of hardware processors (as PreSonus has done with some of its OpenAIR presets). In fact Studio One 2 comes with its own utility for generating and capturing your own impulse responses that makes the process very easy. Not only can this be used for generating OpenAIR ambience presets, but also for capturing the sound of guitar cabinets for use with Ampire XT.

It should also be noted that OpenAIR, in common with other IR-based reverbs, only allows for limited tweaking. If you want lots of parameters to play with, then you will need to turn to an algorithmic reverb such as SO2's 'MixVerb' or 'Room Reverb'.

A convolution reverb is only as good as it impulse responses (captured reverb settings), and OpenAIR comes with some fantastic examples. They extend from great-sounding rooms to some classic hardware presets as well as special effects. This is a strong addition to SO2's effect stable.

If this weren't enough the new IR Maker utility enables you to capture your own ambient spaces. Incidentally, the Ampire guitar-amp modeller has a convolution-based cab section.

We were impressed with Studio One in its original form (though more as a 'work in progress'); this time around it's a real killer. Coming as it does from the hands of ex-Steinberg programmers, for Cubase users it perhaps doesn't quite offer all the functionality that one would expect to see in a well-rounded DAW at this price point.

The holes in its audio editing functionality have been plugged (the pitch and time manipulation features are now very strong, and comping generally works a treat). SO2 offers some of the most powerful project management and integration features going, and the mastering and CD preparation facilities are very strong.

The additional content provided with SO2 enables you to get up and running straight out of the box, and makes the DAW relatively self-contained, though it is perhaps weakest in the area of sophisticated home-grown synthesis - we would like to have seen a built-in polyphonic subtractive synth to complement that simple-but-effective Mojito.

We also feel that a little more use could have been made of colour variation throughout the interface, though there is a general trend away from overuse of colour these days.

PreSonus has, so far, been able to expand this DAW's feature set without distilling the design and usability ethos established early on. All things considered, SO2 now feels like it can take on the 'giant killer' role to which it aspires. Give it a go: you could well be very impressed.