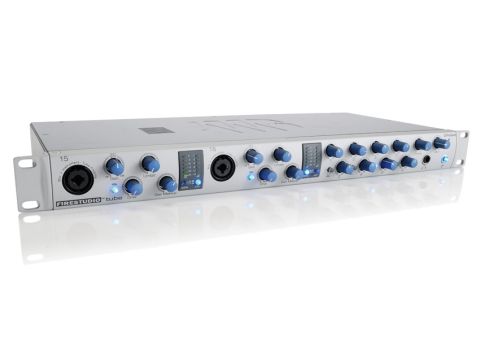 The 16 analogue inputs in the FireStudio Tube make for fuss-free ensemble recordings.

The FireStudio Tube is an audio interface aimed at those who wish to undertake ensemble recording: it has 16 input channels that can be used simultaneously to facilitate this.

Two of those inputs are what PreSonus calls SuperChannels, featuring class A valve preamps and analogue limiters - ideal, perhaps, for those occasions when you are just recording the one instrument or using stereo mic'ing.

FireStudio Tube is a 1U mains-powered, rack-mountable unit featuring 16 inputs and six outputs. The inputs are a mixture of mic and line inputs.

First off you get the two SuperChannels with combi jack/XLR inputs located on the front panel. A further eight mic input channels have XLRs on the rear panel and there are also six line inputs on balanced 1/4-inch jacks. Six more 1/4-inch jacks handle the line outputs - the first two designated as the main outputs.

With all those connections on the rear panel, plus the IEC mains socket and a pair of FireWire sockets, there's not much room left for anything else so PreSonus has had to provide MIDI In and Out sockets on a trailing lead that connects to the rear panel via a nine-pin connector with a screw attachment - not elegant, but effective.

All of the unit's controls are neatly located on the front panel. Each of the SuperChannels has switchable 48V Phantom power plus a hi-pass filter attenuating the low end below 80Hz.

"Two of the inputs are what PreSonus calls SuperChannels, featuring class A valve preamps and analogue limiters."

The preamp is controlled by a gain knob and a Drive knob for dialling in a bit of saturation from the single military grade 12AX7 valve. The input gain is displayed on a six-segment LED ladder, as is the amount of gain reduction supplied by each SuperChannel's switchable limiter, located after the preamp but before the A/D conversion stage and equipped with threshold and gain make-up knobs.

Each of the remaining microphone channels have their own front panel gain knob and have their Phantom power switched in pairs. The front panel is completed by a stereo headphone jack and its volume knob plus a volume knob for the signal sent through the main jack outputs.

Getting up and running is a simple matter of installing the drivers on your computer and plugging in. We used the FireStudio Tube on a Quad Core Mac running Logic Pro and got quality results recording a variety of instruments and vocals.

The eight channels with XLRs on the rear panel are equipped with X-MAX preamps and provide a clean and smooth-sounding audio signal, but it's the two SuperChannels that grab the attention.

While the SuperChannels are sonically not too dissimilar to the others, their extra facilities may be likely to make them the choice for the more critical of your sound sources when recording more than two channels at a time.

The Drive control adds in varying amounts of valve saturation which has a subtle thickening effect, giving sounds a slightly larger presence that could be useful in certain instances. Up full it adds some mild distortion that benefits an electric guitar plugged straight in.

Perhaps more of a practical asset is the limiter for keeping the signal to your DAW in check by catching transients and avoiding clipping. It's relatively transparent and has decent metering, which lets you see just how much processing is being applied.

"The Drive control adds in varying amounts of valve saturation which has a subtle thickening effect."

With six analogue outputs there are plenty of options for sending monitor mixes, easily sorted out by the FireStudio Tube's accompanying Universal Control control-panel software - you can control the routing and levels for its internal mixer.

Universal Control allows you to daisy-chain to up to four FireStudio-family devices for a maximum of up to 52 inputs and outputs but, with a single unit, its main function is enabling the setting up of zero-latency monitor mixes.

This can be a crucial facility if the FireStudio Tube is being used on an ensemble recording with several musicians involved. The process of setting up separate mixes for each of the output pairs and the headphone output can be swiftly carried out with the virtual faders.

PreSonus has included a large software bundle that turns the FireStudio Tube into a complete recording package for beginners as well as adding a few sweeteners for the already initiated.

The ProPak Software Suite (version 4) includes Cubase LE 4 48 as its main music recording and production software and bundles that with PreSonus's own DVD tutorial video - Cubase LE 4 Demystified - to get new users up and running quickly.

For programming your own drum tracks you get the EZ Drummer Lite virtual drummer plug-in, while IK Multimedia chips in with the AmpliTube Duo virtual guitar amplifier and Ampeg SVX UNO LE which does a similar job for bass.

Other plug-ins include PreSonus's own EyeQ EQ and spectral analysis plug-in plus a comprehensive selection from Pluggo Jr.

On top of this there is the Sony Acid Express loop creation software plus a bunch of loops, notably the Martin Atkins Beat Fetish loop library, BandmateLoops PE loop library plus Twiddly bits - 100 MIDI drum loops created by real drummers.

As most of the other multiple input audio interfaces on the market seem to be eight channel jobbies that require the use of an extra ADAT lightpipe-connected unit to get up to 16 inputs, the FireStudio Tube's main asset is the complete count of 16 analogue inputs in a single unit - enough to record a whole band in full flight provided you can make use of the jack inputs as well as the XLRs.

Aside from ensemble recordings, the FireStudio Tube will also do the business in day-to-day use on recording single sound sources at a time - the inclusion of the two SuperChannel inputs and their controls on the front panel, handling mic or instrument signals, does offer some genuine practicality for getting the job done with a minimum of fuss.

This all adds up to a highly practical proposition at a reasonable price that looks even more attractive when you factor in the software bundle.