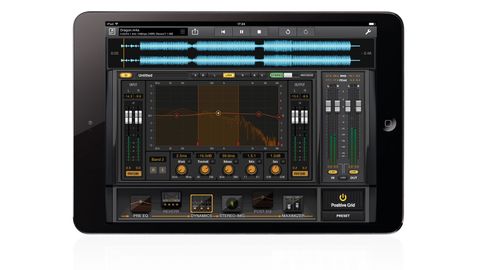 It's unlikely to put any pro mastering houses out of business, but for 'project studio' mastering duties, Final Touch is a thoroughly viable proposition. Amazing!

To anyone who's ever set foot in a professional mastering studio, the concept of an iPad mastering suite might seem absurd. Final Touch, however, is very serious in its goal of providing mobile engineers with all the high-end tools they need to produce polished masters directly on their tablet, short of the speakers themselves.

Final Touch's six devices (activated, reordered and selected in the bottom pane) consist of two EQs, a reverb, a multiband compressor, a stereo imager and a maximiser, the first three able to operate in stereo or mid/ side mode.

A big bypass button is ever-present - as it should be - at the bottom right; and alongside the global preset system (stocked with a decent library of starting points), each module can save and load its own presets.

So, the two linear-phase eight-band EQs are named Post and Pre EQ, Pre meant for feeding into the Dynamics module, but both placeable anywhere in the chain. Every band is switchable between Hi-Pass, Low-Pass, Hi-Shelf, Low-Shelf and Peak (parametric) modes, and Q width can be adjusted by pinching.

The four-band Dynamics module delivers per-band compression with a ratio of up to 8:1, with up to 100ms of Attack and 2s of Release. Its crossovers are adjusted by dragging, which simply never gets tired.

The Reverb offers Room, Hall and Plate algorithms, with high- and low-pass filters, and up to 100ms of Pre-Delay; while the Stereo Imager enables panning and widening and includes a mono filter ranging up to 430Hz. Last but not least, the Maximizer is Final Touch's limiter and dithering section, complete with three noise shaping types.

The touch interface works well, even if it does feel just a tad laggy in places, and visual feedback is provided by a spectrum analyser in the backgrounds of three of the modules (albeit running at a pretty low frame rate) and a vectorscope in Stereo Imager. But most importantly, the sound quality and precision are truly astonishing, particularly considering the price and platform.