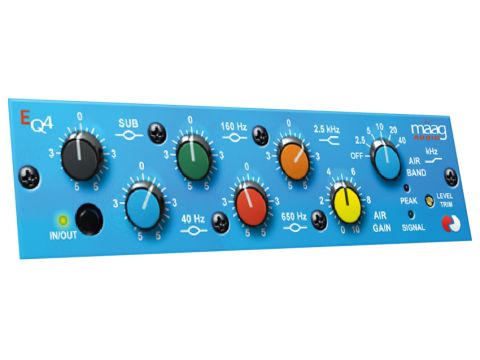 As a way of shaping a sound the Mäag EQ4 is in a league of its own. Fabulous.

The hardware Mäag EQ4 may not be something you have heard of but you have certainly heard it.

Used and cherished by a selection of top engineers and producers, it graces the vocal sounds of artists such as Madonna, Celine Dion, Snoop Dogg and the Black Eyed Peas, to name but a few. Its unique design means there is very little phase shift between the bands, which is why it's often praised for its ability to shape a sound while keeping it as natural as possible.

"The Air band's ability to add presence to a sound or indeed a mix is something we haven't really come across in a plug-in EQ before, and we've used a hell of a lot of them."

The power of six

A six-band EQ sounds like it might be complex but this is no parametric. With the exception of the Air band, each one operates at a fixed frequency.

This is essentially another shelf and is the only band that needs a separate cut/boost knob. Because of the nature of the low phase shift design these bands interact with each other quite significantly. When you boost with one of the bell filters they're quite wide, so you're generally affecting the area around the centre frequency rather than doing something surgical or adding a peak.

The Air band doesn't just add shelved high end, it also adds gain so you do need to keep an eye on the overall level because it's easy to overload. If you boost a lot on the Air it's recommended that you lower the five band pass knobs to avoid 'overcooking'. This is inherent to the design, and takes a little getting used to, but once you're in the swing it becomes second nature.

It's the same when boosting one of the band passes but it's not a fault, just how you're supposed to do it. As an extra feature the plug-in version has an extra master gain knob so you can compensate that way should you prefer.

In use this is a magical device. The Air band's ability to add presence to a sound or indeed a mix is something we haven't really come across in a plug-in EQ before, and we've used a hell of a lot of them. It's particularly fine on acoustic sources, especially vocals, but it can enhance anything.

Knowing its reputation, our first tests were all about adding top end but we then started to play more with the lower bands. It can round out a bass or bass drum and add warmth and depth with equal aplomb, and as a way to get clarity into a muddy sound it has no equal in the digital domain. It reminds us of the awesome analogue EQs made by Decca in the late '60s and early '70s. They have that same ability to add shape and tone to a sound without taking away any of the original character.

There is always a need for a surgical EQ and there are plenty of good ones around, but in the digital domain this is a unique and very special device that will give you the ability to enhance your mixes like nothing else.

Hats off once more to the Brainworx and Plug-in Alliance teams. Another hit.