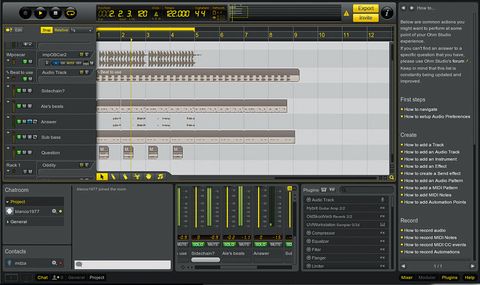 While its operation as a DAW is basic, we're hugely enthusiastic about this ground- breaking online collaboration platform.

At last, Ohm Force - producer of superb plugins such as OhmBoyz, Oddity and Ohmicide - has released its real-time, collaborative, cloud-based DAW. Make no mistake about it, Ohm Studio has the potential to reshape the entire music-making landscape.

The rise of the internet over the last decade or so has brought about unbelievable changes in the music industry. Well-documented are the multitude of benefits and, indeed, the downsides, but, ironically, one of the net's biggest initial promises has never been truly fulfilled.

It's been nearly 15 years since we watched Matt Black, Sinead O'Connor and Thomas Dolby on the BBC's Megalab '99, producing a track together while based in different countries; but despite various abortive (and, sometimes, half-arsed) attempts, the dream of online collaboration simply hasn't come to be.

Ohm Studio could change all of that. It is an audio and MIDI DAW based on a simple principle: it's online, enabling you to collaborate on projects with as many people as you like. Some plugins and applications have offered limited online collaboration in the past, but nothing like this.

Since the entire project is hosted 'in the cloud' (on Ohm Force's dedicated servers), you really are all working on it at the same time. With that in mind, this is going to be a two-stranded review.

First, there's the software (downloaded and opened as an app, just like any other DAW), and then there's the online collaborative aspect. Each of these elements needs to be assessed in isolation before appraising the overall package, so let's start with the DAW itself.

The first step is to create a free account and download the Ohm Studio application. This includes some basic plugins (compressor, flanger, vocoder, etc) and offers the option to splash out a bit more for further Ohm Force plugins and a few extra features, but the core software gives you everything you need to get started.

Let's be clear, though: it is basic. You get audio and MIDI recording and editing, a handful of arrangement tools (including automation and sidechaining), third-party VST plugin support, and recording up to a bit depth of 24, but many of the essentials that we've come to take for granted (groove maps, powerful quantisation tools, audio slicing, etc) simply aren't there yet.

Anyone coming at the core Ohm Studio program from another modern DAW will inevitably miss a lot of these features.

That's not to say that the core DAW doesn't have many things to recommend it, though. There's a modular mixing and audio routing facility (like the back-side of the Reason Rack... without the racks), mid/side stereo control built right into the mixer, and a number of nice 'lesser' touches, like a contextual Inspector window that, depending on what you select, tells you who created tracks, patterns, audio files and plugins, as well giving controls for bouncing in place, pattern placement and length, lists of available plugin parameters and lots of other useful information.

Another great one is the Post-It-style notes that you can place throughout a project, which prove to be as useful when working alone as they are when collaborating.

Taken on its functional merits as a production-orientated DAW, though, Ohm Studio is lacking, and Ohm Force would be the very first to acknowledge this, as a glance at its own list of scheduled features makes apparent.

An obvious example is the very limited audio manipulation: there's the option to timestretch loops to fit, but no warping or anything like that. But there's much more to Ohm Studio than the core DAW because it does one defining thing that no other DAW can...

We're not exaggerating in any sense when we say that Ohm Studio empowers you to collaborate online in the fullest sense of the word. All of your audio and project files are held online - consequently, if you're offline, you can't access them (an offline facility is planned, thankfully, and is clearly essential) - but what such total cloud-centricity brings with it is the ability to collaborate on a project with as many people as you like.

Imagine having a friend in the studio with you, with two screens showing the same project, and two mice/trackpads and two keyboards - and, crucially, the ability to work on different parts of the same project at the same time. It's a fantastic system, whether you're working with somebody in the next seat or on the next continent, and thanks to the online hosting, distance just doesn't matter (assuming you have a fast broadband connection).

Inviting members to a project is easy, and once you're up and running, everything functions just like a regular DAW, except that you and your intrepid chums can work on the project simultaneously. This is initially a little bit odd and potentially confusing, and there is a slight delay while imported and recorded audio files are uploaded to the server and downloaded to all participating machines, but the system works well, and you can see what others are working on in near-real-time.

Mute and Solo controls are user-specific, which is obviously essential from a working perspective but can still be confusing when you're rocking to a groove that uses only four of eight channels and your partner is listening to a different four channels.

The option to monitor your partner's solo and mute settings at a keystroke would help immeasurably, as would screen-sharing (so you can see exactly what your partners are up to, or show them what you're talking about). Both of these are near the top of our wishlist.

Of course, the obvious problem with remote collaboration is that users are very unlikely to all have the same plugins, and if one member of the group is missing an important one, it can be problematic, particularly if it's a synth or sampler.

Consequently, Ohm Studio features a very simple and quick freezing system. It does the job, but we'd still prefer a more enhanced setup that allowed arrangement of the frozen audio (allowing unfreezing and patch tweaks). Currently, you can only generate a bounce- in-place under the frozen version, which allows arrangement but no editing of the original sounds.

However, these are all niggles and understandable teething problems for an application that really does push the boundaries. Ohm Force has - quite rightly - focused on making the core collaborative features work before enhancing and developing the actual specifications and features.

Still, the irony of the whole concept (for now) is that, from a productivity point of view, one of the most appropriate, beneficial situations for this kind of dual (triple, quadruple, etc) control is when you're finishing a track off.

One person could be working on the mix while another copies that awesome edit out through the track, say. As it is currently, Ohm Studio is better suited to idea creation than full track production - at least, that's largely how we've ended up using it, and highly successfully, too.

New concept or not, though, there are a few things that really need to be addressed right away, as they actually stifle the creative process. One such is the lack of looped recording, even with MIDI. This quite simply isn't on, and we urge Ohm Force to make it its number one priority.

And while there is built-in text chat, being able to chat to your partner(s) via audio link would also take some of the residual confusion away and enhance the whole experience immeasurably. And finally, as mentioned earlier, an offline mode is absolutely essential.

On balance, then, Ohm Studio is a decidedly basic recording, mixing and editing tool that should hopefully see some radical functional improvements in the near future. It would also be fair to say that this first version is - how should we put it? - a little 'twitchy' at times, although no more so than certain recent updates to much bigger DAWs. And conceptually, Ohm Studio is awesome.

Beginners will love the ability to analyse other people's tracks and techniques, and even to join or remix other people's projects. And pros will relish the chance to collaborate remotely in real time to get basic ideas down for completion in far more sophisticated, evolved DAWs.

Assuming it takes off, we foresee two possible outcomes: Ohm Studio will evolve into a sophisticated DAW and live up to its promise, or one of the big players will buy the company and integrate the collaboration features into their own DAW.

The third possibility - that computer musicians simply don't catch on to the idea - would be a terrible shame. For that reason, we strongly urge everyone to at least give the free version a try. It's got a long way to go, but for now, there's no other DAW that can do what Ohm Studio does.