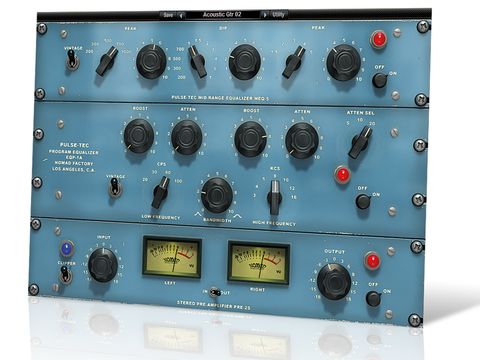 Nomad Factory has turned out a fine Pultec EQ emulation - if you don't already have one, give it a try.

Nomad Factory's latest release is yet another native Pultec equaliser emulation. A quick Google reveals nearly a dozen different Pultec EQ emulations on the market already, so you might be wondering what all the fuss is about.

The original Pultec hardware units were crammed full of tubes, laden with massive Bakelite knobs, and first appeared way back in 1951 - today, a working unit can easily sell for thousands.

The most notable thing about Pultec's most commonly emulated model, the EQP-1A, was that it had individual boost and attenuation knobs that both worked on the same lower frequency range, generating unusual EQ curves when the two controls were used in combination. It's a tool still very much in demand by mixing engineers and producers today, which is testament to the sheer musicality of the original design and the reason so many software developers have emulated it.

Firing the plug-in up, the GUI looks splendidly faithful to the original hardware - tasty eye candy for tired engineers' eyes.

The plug-in is split into three distinct sections. The top section represents the MEQ-5 and has two Peak bands: high and low, each enabling up to 10dB (low) or 8dB (high) of boost to be applied to one of five preset frequencies. There's also a Dip band, for applying up to 10dB of cut to one of 11 bands, ranging from 200Hz to 7kHz.

Occupying the centre of the 'rack' is the EQP-1A. As mentioned, this has both boost and attenuation controls for the low shelving section, along with an attenuating upper shelf and a boosting treble peak with bandwidth control. The final section is the preamp, which features input and output level adjustment and a clipper option to keep the output in check.

Nomad claims that the plug-in is just the ticket for adding life to digital recordings, or as a "final touch" for mastering. We'd generally agree, although we wouldn't recommend it for all mastering situations.

Pulse-Tec EQs can certainly add warmth to a broad range of instruments, and those famous overlapping boost/attenuate controls can really bring the bass to life. If you're finding it hard to make an instrument gel in the mix, a few small adjustments with Pulse-Tec EQs can work wonders, and the clipper section, while not vital, is handy if you crave yet more warmth, or even a little dirt. The presets aren't too shabby either.

So how does Pulse-Tec EQs stack up against other Pultec emulations? Not so long ago, IK released the Vintage Tube Program Equalizer as part of the T-Racks 3 bundle, and it's now available separately. Rather more venerable is the UAD Pultec-Pro, which has been around for years.

Comparing all three, it's pretty hard to tell the plug-ins apart. IK's Program Equalizer is just the EQP-1A on its own, but it does have a more sumptuous bottom end and the saturation characteristics of the real thing.

UA's Pultec-Pro obviously needs a UAD card to run and has a slightly more up-front, clean sound than IK's effort. Pulse-Tec EQs comes with a preamp section and clipper and has by far the nicest GUI, but is also the most expensive. Sonically, we'd say it sits right in between the other two: sweeter than the Pultec-Pro but not quite matching the smooth, rounded bottom end of the Program Equalizer.

Ultimately, if you don't already own a Pultec emulation and are looking to expand your processing arsenal with something a little different, you won't go far wrong with Pulse-Tec EQs.