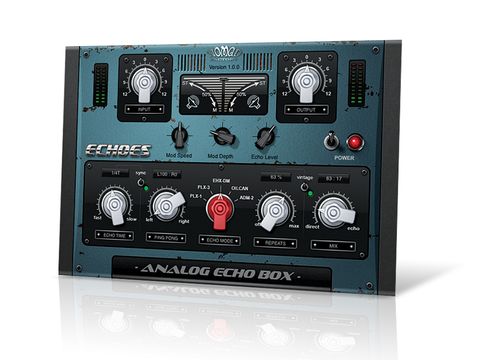 The most convincing tape delay we've heard in recent times has to be Universal Audio's EP-34 Echoplex for UAD-2.

Emulations are selected using the red Echo Mode knob in the middle. Beyond this, there are a number of typical delay-type controls including synced and non-synced delay time (10ms to 2s), ping-pong control, number of repeats and wet/dry mix.

Of the three central black dials, two switch function to match the echo mode (the third is simply Echo Level). So, depending on the mode/emulation, these two knobs could affect tone, modulation or drive.

All modes offer a 'vintage' switch, which acts as a band-pass filter on the feedback signal. Rounding things off are input and output level (+/-12dB) and a stereo width control for taking the overall output image from mono to stereo.

With so much variation, you might wonder where to start with Echoes. However, switching through the modes from left to right reveals that they're arranged in a sensible manner. To the left, the two Echoplex imitations sound the most hi-fi, whereas to the right, the ADM-2 and Oilcan are the most coloured and 'darkest'-sounding.

When you launch the plug-in, it defaults to the central option: Nomad Factory's take on the ever-popular Memory Man.

Both Echoplex-alikes cover typical tape echo territory, and because delay times go from 10ms to 2s, they are more flexible than the originals. Creating bent dub sounds is great fun and, with tempo sync off, delay time sweeps are smooth and realistic.

On balance, our favourite of the two is the less-refined PLX-1, which includes wow and flutter and drive controls instead of treble and bass like the PLX-3. However, neither quite captures the silkiness of UA's EP-34.

The Memory Man Deluxe's distinctive sound is created by the character of its modulation and its 'bucket brigade' chip-based delay circuit. Echoes does a great job here of recreating this classic swirly guitar delay, and although we found we could push it into manic feedback territory, we kept returning to that signature chorus-esque delay sound.

By contrast, the ADM-2 is a fundamentally simpler design, and although it's great for dark guitar slapback or synced delays, it's less flexible.

By far the most curious delay emulated by Echoes is the Tel-Ray Oilcan, a '60s-era unit employing the so-called Adineko Memory System.

This combined a carbon-coated rotating aluminium disc and two wipers. The ­first wiper recorded the incoming signal onto the disc, while the second was the pick up. The name refers to the fact that the disc and wipers are in a sealed, oil-f­illed can, to improve the charge retention of the disc and lubricate the mechanism.

The result is a slightly creepy-sounding delay that's prone to variations and vibrato. At the time, Tel-Ray exploited this aspect of the technology to create a host of vibrato, delay, reverb and rotary speaker effects.

Echoes' Oilcan is closest in sound to the Memory Man emulation, albeit with simpler modulation. Even so, the tone control does add further f­lexibility, and overall the Oilcan stands out when it comes to producing earthy delays with a touch of spookiness.

Finally, all modes benefit considerably from the stereo ping-pong option, enabling you to create far richer-sounding effects than the original hardware (which were all mono units, of course). Our only slight moan is that there's no dedicated delay-only pan control.

Overall, we really like Echoes. Its five distinct delay types mean it has more variety than typical vintage delay emulations, and those who regularly use guitars in their music should take particular interest in it.

Now listen to our Echoes audio demo to hear:

Picked guitar - Here we have a simple picked electric guitar pattern and then we're adding a quarter triplet delay. So, first you'll here the guitar dry then with each of the delay modes in the following order - PLX-1, PLX-3, EHX-DM, OILCAN and ADM-2. In each instance we'll leave the end of the phrase so you can here the delays tail off.