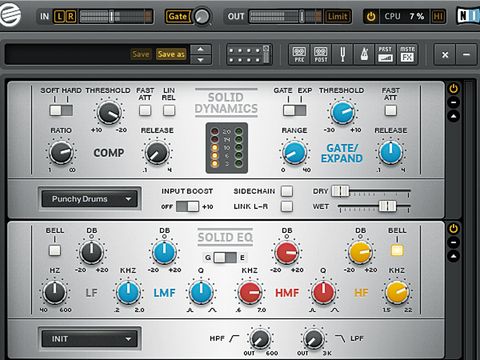 It hasn't been in the mix processor market for long, but with releases like this, NI is proving to be a real contender.

Alongside recent headline releases, Native Instruments has expanded its mixing effects line with the likes of Vintage Compressors and Transient Master. Joining them is this three-pack of SSL-inspired processors, which appears to be based primarily on elements of the famous SSL 4000 series consoles.

The SSL channel strip's powerful EQ, flexible routing, responsive gates and snappy compressors make it more a creative tool than a corrective one. However, in the early days, many felt that the original 4000 E Series console had incredibly harsh EQ.

What's more, the low-frequency band also came in for some critical comment, resulting in a shift from the 'brown knob' to a more powerful 'black knob' model. The E series was eventually superseded by the G Series desk, which featured a different equaliser design.

So, what exactly is the difference? First, the G Series shelves are far more like classic Neve EQs, so as you increase the gain, you get a dip before the lift (the so-called overshoot).

By contrast, the E Series shelves have more linear behaviour, and hence boosting high frequencies inevitably lifts the high mids quite considerably too.

Onto the peaking shapes. For a selected Q setting, the E Series has a constant bandwidth at all gains, so it can be quite precise at low gain. In contrast, the G Series bandwidth is affected by gain, having the same sharp width as the E Series at the maximum, but becoming gradually broader as gain reduces.

Understandably, the G EQ is viewed as more musical, while the E EQ is better suited to surgical tasks.

NI's plug-ins are Solid Dynamics, Solid EQ and Solid Bus Compressor, and they're available singly (€99 each) or in the more competitively priced bundle that we're reviewing here.

Like NI's other studio effects, they have to be used within either the free Guitar Rig 5 Player or Guitar Rig 5 Pro, if you own it. The Guitar Rig shell can run as a VST, AU or RTAS plug-in, and even standalone.

All things being EQual

Solid EQ is a six-band design with two fully parametric midrange bands, high and low shelves with individual bell shape option, and high- and low-pass filters. You can switch between the E- and G-type EQ curves, and you get +/- 20dB gain on the four main bands (a couple more dB than a real SSL). The filters are hidden in the foldaway tab at the bottom, along with preset management and factory presets.

Solid Dynamics combines a compressor and a gate/expander. Each is a simple three-knob design with threshold, release and ratio (compressor) or range (gate).

For the gate, there's a fast attack option (100 rather than 1.5ms) and you can switch between gate and expander ratios. Rounding things off are a pair of gain reduction meters.

The foldaway Expert tab once again includes a few presets, as well as input boost (+10dB), stereo linking, wet and dry level faders and a sidechain switch. As ever, the method by which you access sidechain functionality will be specific to your DAW.

Solid Dynamics and Solid EQ effectively provide you with most of the important sound-shaping elements of an SSL channel strip. The Guitar Rig shell enables you to put them in the signal order you wish, although other flexibilities from a real SSL channel strip such as putting the filters on the input input or EQing the sidechain are less easy to replicate.

The expert tab includes dry level, wet level, presets and optional stereo linking. Upon thorough inspection of the controls, it becomes apparent that they more closely reflect those of the more recent SSL X-Rack compressors, with six ratio options (1.5:1up to 10:1) and more release settings.

SSL's classic desk processors justly deserve their reputation, combining power and musicality of sound. So, how do NI's interpretations stack up?

First, the EQ. This is instantly recognisable, particularly the edgier E setting. Combining the low band in bell mode and the high-pass filter enables you to create amazing punch for kick drums and bass-heavy sounds.

It's worth adding that both bell settings are sharper than the sharpest options on the two mid bands, making the upper band great for supplying click and crack.

We also spotted that engaging the bell option switched that band to E type, even if the overall setting was G. This facilitates mixing and matching E and G types to some degree - a nice touch.

Onto the Solid Dynamics, and first we try a snare drum. The settings enable snappy results, with the linear release noticeably tighter than the logarithmic. Also useful is the +10dB gain boost.

However, the real gem is the parallel processing - it provides the means to go for the fast attack to really squash the transient and then blend the dry signal back in for a fatter snare sound.

The Solid Bus Compressor has the hallmarks of the classic G Series mix compressor, although with the aforementioned X-Rack-style parameters, you have an additional lower ratio to play with. In use, both this and the 2:1 setting combined with the 'auto' release are great for gentle mix glue.

If you go for a slower attack and fast release, the sound takes on the classic SSL pump, which is spot-on for dance and pop music. Factor in the sidechain and it makes a pretty flexible general-purpose compressor, too, although a slightly faster attack setting would have been a nice extra for this.

Native Instruments has done a good job with these plug-ins, which live up to their 'Solid' tag by delivering the tonal power and musicality ofthe original hardware. Factor in the added flexibility of parallel processing on the compressors, and they offer something not available on the majority of SSL emulations (none that we can think of, in fact). Even so, therequirement to use Guitar Rig 5 as a shell seems a bit pointless - as with NI's Vintage Compressors, it's the biggest downside to an otherwise impressive line of processors.