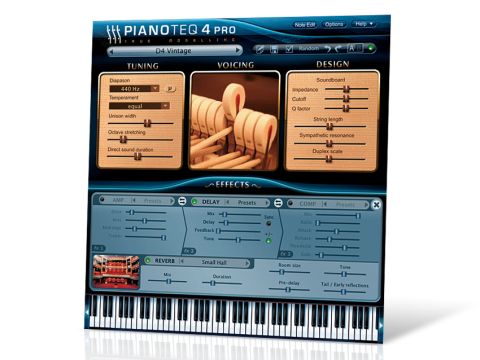 Modartt's argument that you don't need samples to create a great-sounding software piano is becoming more compelling with each Pianoteq update.

Pianoteq has always been the slimline virtual piano solution, offering all the requisite taste and playability without the full-fat hard drive footprint or system requirements of ROMplers.

Its tiny 20MB (yes, megabytes - not gigabytes!) size is made possible by the fact that it's a sample-free zone. Pianoteq's sound is generated in real-time via physical modelling, and you can tweak it using a wide range of parameters.

"This is the richest, warmest, most detailed Pianoteq grand we've yet encountered."

The headline arrival in version 4 is a new grand piano model, the D4. This takes its name from the instrument it was modelled on: a Steinway D.

While we wouldn't like to speculate on how true the D4's tone is to the hardware that inspired it - it's better to think of it as an instrument in its own right - what we will say is that this is the richest, warmest, most detailed Pianoteq grand we've yet encountered.

Another key addition to Pianoteq 4 is a tidy convolution reverb unit. Wisely, Modartt has kept the number of controls here to a minimum; there's nothing that will scare tech-wary pianists, though more adventurous sorts can load in their own impulse responses.

Most importantly, the new reverb does a fine job of giving the piano a more realistic sense of space. As before, your piano's specs and tonal characteristics can be adjusted in the Tuning, Voicing and Design panels.

There are other new effects, too: delay, chorus, flanger, amplifier and compressor. You may have these bases covered by your favourite plug-ins, but the processors are nicely employed in many of the presets (particularly those included with the electric piano and Clavinet add-ons) and are particularly useful for those who will be using Pianoteq standalone as a performance instrument.

Speaking of which, there's now a handy performance log in the standalone Pianoteq app; even if you don't hit Record, your last 25 played sequences (maximum of 400,000 MIDI events) are captured behind the scenes for easy recall later. What's more, this is true even if you close down the application and turn your computer off.

The upside of this is that you'll never lose that inspirational bit of noodling again, though you do find yourself listening back to performances and wondering whether you were really that good/bad.

On the housekeeping side of things, a clever little keyboard response calibration wizard has been added so that you can be reassured you're getting the optimum performance out of your MIDI controller and sustain pedal, and the interface can now be resized to suit your display.

Although it doesn't look a great deal different to its predecessor, Pianoteq 4 does feel like a proper evolution of the brand. You could still point to the lack of a dedicated upright piano as a downside, and some people will always claim that sample-based solutions sound more realistic, but we continue to be impressed by the quality of the results that you can achieve with this software.

Don't be put off by the high price, either: this is for the Pro version, and the majority of people will find that one of the more affordable iterations will suffice. Existing users, meanwhile, should take advantage of the generous upgrade offer.