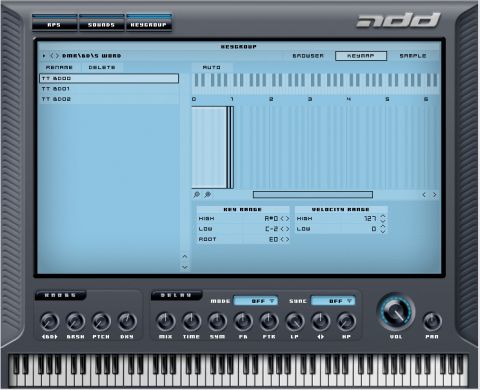 It's hardly revolutionary and it won't win any style awards, but Add is a fun plug-in that could take you down new creative avenues.

The likes of pHATmatik Pro and Beatburner showed the way, and many others have ensured that this ground has been thoroughly well-trodden. Indeed, you probably have beat matching and loop slicing features in your DAW.

The fact remains, however, that many of these tools fix their focus squarely on slicing up and playing back sampled drum loops, and pay little attention to the possibilities offered by MIDI loops used with chromatic instruments.

Owners of Korg's Karma will tell you that an advanced MIDI player coupled with a good sample-playback engine can be inspirational, and anyone who's old enough to remember Dr T's KCS sequencer will recall the joys of triggering MIDI sequences and patterns live from their keyboard. Sure, some DAWs still enable such things, but a less-than-inspirational workaround is often required.

Fortunately, Mesa+ understand the creative potential of the MIDI loop, and have produced a dedicated phrase sampler in the form of Add. This is a Windows VSTi (an AU version is in the works) that's built around their Realtime Phrase Sequencer (or RPS). This sequencer plays both the onboard multisampled instruments and imported MIDI/WAV files.

At its most basic level, Add is an eight-part multitimbral sample player with all of the usual synthesis functions. Each of these eight parts can consist of up to four separate layers.

A typical Add patch starts with a sample (or a group of samples) being assigned to various keys in a keygroup. These samples might be multisamples of a single instrument, or the products of a beat slicer such as ReCycle! or BeatCreator.

It's at the keygroup level that you find most of the familiar synthesis options. There's a pair of syncable step LFOs and a pair of AHDSR-style envelope generators. The filters are multimode and offer low-pass, high-pass, dual-bandpass and notch settings.

These features provide a whole load of timbre-twisting power, and it's easy enough to render a completely new sound from even the most hackneyed loop.

You may have noted that the above description could apply to any number of ROMplers, both hard and soft. But Add breaks away from the mould in the way that its onboard sounds are played back.

Sure, you can trigger them one note at a time - just as you might a SampleTank or Ravity patch - but the real fun lies in using the Realtime Phrase Sequencer.

The RPS is able to call upon the vast number of included patterns (or 'clips') and also import standard MIDI files (such as those rendered in an external beat slicing tool or just about any DAW). As with the samples, each clip can be given a certain key range, and up to 128 clips are available for each of the eight parts.

Any clip can be edited - or new clips created - via the piano roll editor. There are loads of humanise and swing functions on offer to spice up your patterns; you can humanise note lengths, velocity levels and more. A lot of mileage can be had from the onboard clips if you alter and enhance them in this way.

The quality of the supplied clips is pretty good (as is that of the samples), and you can have fun mixing and matching different sounds with different clips. We got some intriguing results when we assigned a drum clip to a bass sound, for example.

As we suggested earlier, there's nothing particularly innovative or new here, and some people will have no need or desire to augment the loop functions offered by their host sequencers. That said, even Live users might find that the included MIDI files and 200MB+ of samples could be worth the 139 euros that Mesa+ are asking for Add.

The software isn't perfect, though - CPU usage is a bit higher than we expected, for a start. Granted, we tested Add on an AMD 1900+ that could hardly be described as cutting edge, but 30% or more of it was chomped up by a single note of some patches. We can play many more samples in Kontakt without generating numbers like that.

The GUI isn't exactly inviting, either, though once you get used to it, you can find your way around easily enough. Still, we can't help but be reminded of the crowded and uninspiring LCD screens on our old hardware workstations.

Another problem revealed itself when we were recording a track with Add in Sonar. Once, when we clicked stop in the transport bar, Add kept bopping along and refused to shut up. In the end, we had to change the patch to get it to stop playing. This might not be a major issue, but you certainly wouldn't want it to happen in a live environment.

Despite these quirks, we've had a lot of fun with Add, and you might too. There is a demo available on the Mesa+ website, and although it lacks much of the full version's content, it'll still give you a pretty good idea of what the software is all about.

Add isn't an essential tool, but neither is it inconsequential, and it might just provide you with some much-needed inspiration.