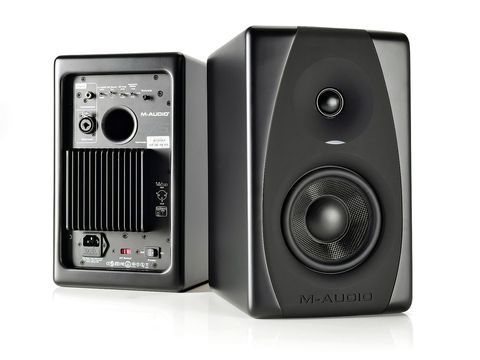 Excellent compact monitors that can certainly compete with the best at this price level.

As if the mid-range monitor market wasn't competitive enough already, M-Audio has revamped its line-up with the introduction of two new designs which it claims work particularly well in difficult acoustic environments.

These CX5s are the smaller of the two new Studiophile models, both of which stick to the tried and tested two-way ported enclosure design. With a five-inch low-frequency driver and 1.25-inch silk-domed tweeter, the CX5s look familiar as soon as you pull them out of the box and feel incredibly weighty and solid with a high quality finish. The only design feature that sticks out is the Kevlar-coned woofer.

Initial listening tests are instantly impressive, with the CX5s reproducing a variety of material with clarity and accuracy. The bass response is excellent for such a diminutive driver, producing clear notes way down the frequency range and a powerful thump more usually associated with far bigger speakers.

Starting to work with some rough mixes, the Studiophiles continue to impress, reproducing soloed tracks with a revealing accuracy while maintaining a good overall balance that makes mixing straightforward.

M-Audio is keen to point out the way that the CX5 can be made to suit any environment, offering a level of adjustment not often found at this level. That vital tweakability factor comes in the form of a series of toggle switches round the back, and this could just be the area where the CX5s offer a significant advantage over their rivals.

Whereas the majority of monitors in this range tend to offer basic adjustability, the CX5s really go to town. Alongside the usual RCA and combo input sockets you'll find controls for low frequency cutoff, mid boost and high trim and an acoustic space switch. Together, this should be enough to help tailor the sound to most rooms.

Our only minor complaint about the rear panel layout is that the volume control is unnecessarily small and fiddly. Plus, it's only detented at the half way point, which makes balancing the levels of the two monitors much more tricky than it needs to be.

The sound of the CX5 is certainly comparable with its rivals. For five-inch bass drivers, the low-end response is particularly impressive, offering bottom end thump and musicality which you wouldn't expect from such a compact nearfield. What's even more unusual is the way that these monitors seem equally comfortable with any style of music; whereas some small nearfields are noticeably better with acoustic music or struggle with bass-heavy dance, the CX5s don't show any weaknesses no matter what you fed them.

Of the excellent tone controls, the mid boost control is particularly interesting, allowing a peak to be introduced at around 2kHz in order to increase focus on the midrange while mixing. Some might argue that it's unnecessary, but it offers you plenty of options to help make sure you get the right sound for your room and ears.

At this price point, the market is already crowded with good monitors from a variety of manufacturers. The CX5s are in the same range as models like the Genelec 8020As, KRK VXT4s and the outstanding Adam A5s. They wouldn't shame themselves in such illustrious company so we strongly recommend that you try them out.